The bigger movies get, somehow the smaller we get. Increasingly elaborate special effects, marathon-length runtimes, plots that sprawl off the rails within the first 20 minutes: Pictures built to entertain us don’t necessarily make us feel more human. But Matt Reeves’ War for the Planet of the Apes is something else, a summer blockbuster that treats its audience as primates of a higher order. It’s not going to change the summer-blockbuster landscape single-handedly, but at least it comes by its thrills honestly: This is a spectacle that trusts us to think.

In the first movie in the rebooted franchise, the 2011 Rise of the Planet of the Apes (directed by Rupert Wyatt), a bunch of superbright chimps—the virus that has made them so smart is lethal to humans—break out of a Northern California research facility and scamper over the Golden Gate Bridge to freedom in the redwood forest. In the Reeves-directed Dawn of the Planet of the Apes (2014), set some 10 years later, the apes have built a world of their own, but it’s threatened by the relatively few surviving humans—tensions escalate into an all-out war between ape and man. The anchor character of those two movies, and of this one, is the chimp Caesar, played, via motion-capture technology, by Andy Serkis. His simian brow is noble. His eyes carry both shadows of sorrow and flickers of hope. He’s a leader of apes, and men could learn a thing or two from him too. But in Dawn of the Planet of the Apes, a hate-filled bonobo named Koba (Toby Kebbell) instigated a war Caesar was unable to stop.

As War for the Planet of the Apes opens, Caesar and his cohorts defend their forest world against a battalion of human intruders. They’re able to corner this particular group of soldiers, though instead of killing them, they send the troops back alive to their colonel, as a message of peace. But the Colonel (Woody Harrelson), a war-hardened loon with rogue ambitions of his own, will have none of it. He unleashes more violence against the peaceful apes, who are simply trying to rebuild their war-torn home. Caesar realizes he must fight back, though the real demon he struggles against is the angry legacy of Koba. (Koba, killed off in the last film, reappears in spirit in this one.)

There’s ape betrayal, ape bravery, ape joy and lots of ape action in War for the Planet of the Apes. Yet the picture’s plot mechanics aren’t nearly as significant or as memorable as its characters are: The way they move and interact invites curiosity and sometimes even wonder. The apes who have had contact with humankind speak English, but most communicate via sign and body language—their interactions constitute a ballet of interpretive dance and knowing looks. In addition to Caesar, many old favorites from the other movies return, the loveliest among them the empathetic orangutan Maurice (Karin Konoval): His gentle soul shines through his luminous pie plate of a face. He’s a calming influence on Caesar and a watchful maternal stand-in for the mute, though never excessively cute, orphan girl who’s adopted by the apes (Amiah Miller). Best of all, though, is the chimp played by Steve Zahn, an old-man loner who goes by a name some humans gave him long ago: Bad Ape. Bad Ape is actually a great ape, a marvelous, semi-forgetful senior citizen whose doddering generosity is the sort that can save the day. (When he holds a pair of binoculars to his eyes the wrong way around, the “oooooohhhh” of disappointment that escapes his lips is one of the movie’s goofiest little pleasures.)

War for the Planet of the Apes is hardly all joy and light: Harrelson’s loose-cannon Colonel is a sadist and a dictator wannabe, and the movie contains some harrowing scenes of ape suffering. Be forewarned if you’re thinking of taking really little kids. But there’s plenty of vital poetry in the picture, particularly of the visual sort: The sight of apes sitting upright on horseback, riding off to battle or just trotting along a beach, is strangely stirring, a picture of animal dignity that isn’t quite right yet makes all kinds of sense. The special traits of these creatures—their eagerness to do the right thing and their impulse to look out for one another—are qualities to which real humans should aspire. In the words of Bad Ape, a kind of broken English-as-a-second-language that nevertheless gets the message across: “New friends. Special day.” 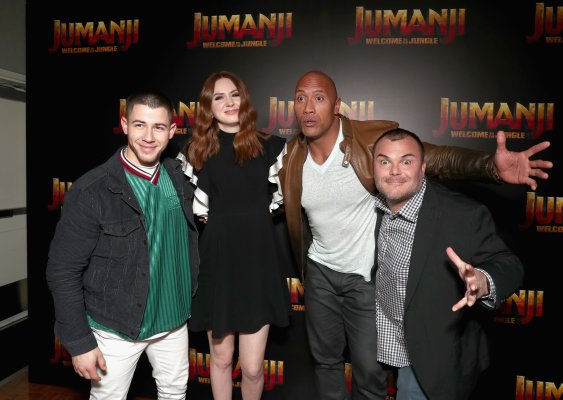 The Rock, Kevin Hart and Jack Black Go Wild in Jumanji: Welcome to the Jungle Trailer
Next Up: Editor's Pick