Do you know what we should do the next time a clutch of male Republican Senators decide it’s ok to go behind closed doors and rewrite the entire country’s health care plan without a single woman in the room? Send President Selina Meyer over there in her stilettos to give them a piece of our minds in language they might understand.

I know, she’s a narcissistic, foul-mouthed fictional ex-President on an HBO series, but I think it’s time for women to take a page from the Meyer playbook. We’ve been tying ourselves into knots trying to be ambitious but likable, feminine but not too sexual, tough but not bitchy. And all this rule-following isn’t working. There are fewer women in the House now than there were a few years ago.

Just look at what happened to the female candidate in the last presidential campaign. I know… We shouldn’t dwell, it’s not healthy, but let’s—just for a minute. Donald Trump said stunningly sexist, bigoted, cruel and obviously untrue things. Many times. He hawked his own products at news conferences, refused to release his tax returns and got into a Twitter fight with the Pope. He broke every rule and there’s a lesson in that for women: If the actual president of the United States can get elected doing outrageous un-presidential things, all bets are off. So let’s free our inner bitch and knock down a few backroom doors. It’s time to take a chance on letting our id out.

We could ask the incomparable Julia Louis-Dreyfus for lessons in how to play the role of someone who is sure she deserves a place at the table even after a humiliating defeat. At one point in the most recent season of Veep, Meyer finds out that all the other ex-presidents are posing for a group photo without her. Sure, she wasn’t actually elected president. She assumed the office when her predecessor was forced to resign and then lost the election less than a year later. She’s not a real member of the club. Given that, a lot of women would be too embarrassed to insist on being in the picture. It would seem presumptuous, arrogant, unfeminine. Not Meyer, she pushes right to the front in a Trumpian way. She believes that she belongs.

You’ve seen the studies; most women are not like that. Men will apply for a job even if they barely have half the requirements. Most women won’t apply unless they have all the requirements. Recently, there was a study of how testosterone supplements affect men. Men are generally more secure in their intelligence and decision-making than women, and perhaps not surprisingly, when they’re given extra testosterone they became even more confident — so much so that they sometimes ignored data that conflicted with their conclusions, which resulted in mistakes. But that doesn’t keep men from staying in the game.

Same with Meyer. Throughout the series she is roundly disliked and mocked, but every time there’s a bump in the polls, a glimmer of success, she gets up and throws herself at the doors of power again.

In the season finale, there’s a telling flashback to when she was first elected vice president. She walks to the Oval Office in teetering heels and a smart purple suit and announces herself: “Vice President Selina Meyer to see the President.” An aide cracks open the door, tells her the president is very busy, and when she doesn’t leave, he angles his way out of the room pulling the door closed behind him without letting her look inside. As he leads her away, the aide explains that the President doesn’t expect her to actually do anything as Veep except “continue to be a woman.” It’s crushing.

But Meyer refuses to be political window dressing. She plots, she maneuvers, she lies, she manipulates and she gets into that office, albeit briefly. Yes, she’s awful. But there’s something so deliciously satisfying to watch her be selfish and unlikable and constantly stating her demands, whether it’s a presidential library, sex or a certain kind of protein bar. Just like a powerful man.

She’s also unapologetically un-maternal, a cardinal sin in an era when every woman in power, including Hillary Clinton, lists mother or grandmother as their “most important job.” When she’s shown her baby after it’s born, she says “Is that its hair?” When asked if she’ll breastfeed, she says, “God no… I’m not a goat.” Instead she looks down at her newborn lovingly and then looks up at her husband and tells him she wants to run for Congress. Laughing at that feels transgressive, and wonderful.

At one point Meyer is hot and flushed and her back hurts. Her aide says it must be menopause. At that, she rises up like a dragon insisting that it most definitely is not. Finally they send a doctor. After examining her, the doctor says soberly that he’s figured out what’s wrong: she’s had a heart attack. Meyer screams with joy and relief: “It’s not menopause!” It is a moment of vanity and truth.

Her quest this season was to get her presidential library funded. And she does, against all odds. The design is shaped like a vagina — she calls it her “vagibrary” — and features a stairway that goes through a glass ceiling, maybe even press their noses against the ceiling but as an aide says, the engineering is a little unstable. “Just like what it feels like to be a woman,” mutters Meyer. She’s mocking the whole glass-breaking trope — her memoir is called “A Woman First: First Woman.” But she did break that glass. Not in a modest, deserving way, but inelegantly and imperfectly. And perhaps that’s the most transgressive thing of all: accepting an imperfect woman. 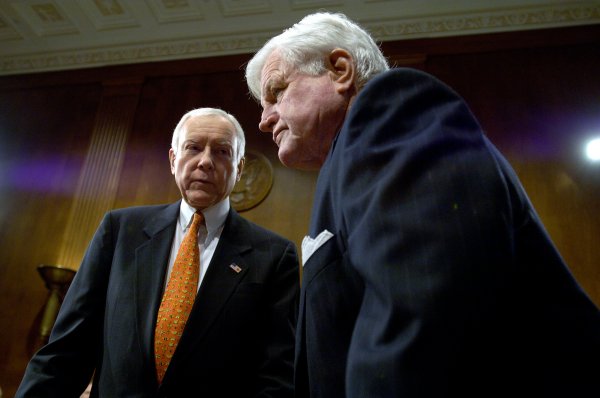 Sen. Orrin Hatch: I Am Re-Committing to Civility
Next Up: Editor's Pick