KFC Explains How its Chicken Is Cooked

By Elizabeth Sherman / Food and Wine

In a new interview with News.com.au, KFC defends its cooking practices. The new managing director for the chain’s South Pacific region told the Australian newspaper that fast food is “misunderstood.”

“There’s a perception that, because it’s fast food, it’s going to arrive pre-cooked and then it gets thrown in a fryer and then served up,” Lawson told the newspaper. “The art of cooking that goes on is something that gets misunderstood.”

Lawson took writer Dana McCauley behind the scenes, where she gave her a detailed break down of how KFC’s chicken is fried.

First, the fillets, which apparently come out the refrigerator fresh, are dunked in a bucket of cold water. “We dip it in there because it just helps the flour adhere to the chicken,” Lawson explains.

Then the fillets are covered in the breading mix, and then loaded onto a rack that is lowered into a vat of hot oil. “The secret is the spice mix — our own people don’t know the recipe,” she says.

Lawson hopes that her explanation will help dispel the myth KFC’s food comes to its kitchens frozen or pre-fried.

Recently, fast food chains have been taking steps to make their food at least seem healthier: McDonald’s recently announced they’ll be switching to fresh beef in their burgers, while several other chicken producers and fast food chains, including KFC, have vowed to stop using antibiotics in their chicken supply.

While it might be a relief to hear that KFC fires their chicken by hand, that doesn’t exactly mean it’s healthy: The Zinger burger, for instance, which is made with a fried chicken patty, still packs 18 grams of fat.

Sure, it’s a good sign that mass-production restaurants are taking a little more care in their preparation. But given the reputation of convenience food chains, forgive us if we still order our bucket of chicken with a heaping side of skepticism. 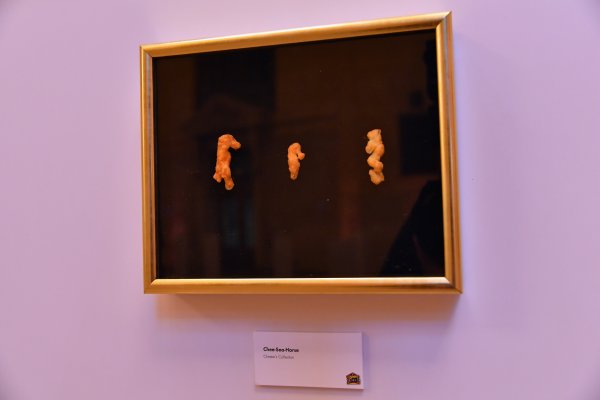 Cheetos Museum Pays Big Bucks for Your Weird-Shaped Snacks
Next Up: Editor's Pick