Ali Chandra never intended to become a political warrior. Before 2016, she wasn’t even registered to vote. The New Jersey mother of two didn’t have time for politics, she says, because she was too busy taking care of sick kids — first as a pediatric nurse, and then as a full-time mom to her son Ethan, 2, who has a rare condition called heterotaxy: he was born with nine congenital heart defects, two left lungs, and five spleens.

But when congressional Republicans began trying to repeal and replace the Obama health care law that allows Chandra to afford her son’s care, she sprung into action. She lobbied Rep. Bonnie Watson Coleman (D-NJ) so intensely that Coleman dedicated her “no” vote on the House health care bill to Chandra’s family. She’s in touch with New Jersey Sen. Cory Booker’s office about stopping the Senate bill. Her family can’t go to big protests because of Ethan’s condition, but when Chandra tweeted a photo of her family’s medical bill, it went viral instantly: Ethan’s hospital care cost nearly a quarter of a million dollars over just two weeks. The Senate’s version of the health care bill, which will be considered after the Fourth of July recess after an earlier vote was scrapped under pressure, may allow states to reverse Obamacare’s ban on lifetime limits for insurance payouts. That could force families like Chandra’s, who rely on Obamacare’s ban on lifetime limits to keep their private health insurance affordable, to choose between declaring bankruptcy and losing a child.

“We’re the ones who make sure they get their meds on time, we hold them down for painful procedures and comfort them afterwards: the only thing we know how to do is fight,” says Chandra, whose schedule now includes media appearances to protest the Republican health care plan in between doctors’ appointments and the occasional cry in the shower. “We’ve been fighting since the moment we heard our kid’s diagnosis, since the moment they were born. This is just a regular day for us.”

As the bill to repeal and replace Obamacare hangs in the balance in the Senate, Chandra is one of the many parents of sick and disabled children lobbying lawmakers to kill a bill that they say could bankrupt their families and cause their medically fragile children to lose health coverage altogether. From calling lawmakers to bringing sick children to Capitol Hill to confront lawmakers, many anxious parents from across the political spectrum are becoming activists for the first time and emerging as one of the most potent sources of opposition to the controversial measure.

“There’s nothing that can stop you,” Chandra says. “It doesn’t matter if you haven’t slept or eaten or showered, you just keep going.”

Even parents of sick adults are terrified about the possibility of a change in the health insurance rules. On June 20, Rev. Janice Hill got on a bus from her small town in West Virginia to Washington, D.C, and later that day, she found herself face-to-face with Republican Senator Shelley Moore Capito. She showed the Senator two pictures of her daughter Amy, 41, who has a rare form of cancer that cost more than $1 million to treat in the first seven months. “I think it was just true instinct, like ‘now’s the time,'” Hill recalls of her decision to confront the Senator. “She needs to see who this bill is going to hurt. I wanted my beautiful daughter’s face in her mind when she votes.”

On Tuesday afternoon, as it became clear that the health care bill did not have enough support to pass, Senate Majority Leader Mitch McConnell announced that he would postpone a vote until after the July Fourth recess, a small victory for the activists who opposed it. Shortly after that announcement, Sen. Capito released a statement calling the bill “not the right fix” for West Virginia, and saying she “cannot support it.” McConnell’s decision to delay the vote came after the Congressional Budget Office found that the Senate bill would leave 22 million more people without health insurance by 2026, while decreasing the federal deficit by $321 billion over 10 years.

It’s almost politically impossible to argue with a parent of a sick kid over their child’s health care, which is why these activists are especially potent. “Talking about sick kids is right up there with puppies and Christmas in terms of evoking an emotional response,” says Dana R. Fisher, a professor of sociology at University of Maryland who studies protest and social movements. Fisher mentioned that Mothers Against Drunk Driving (MADD) was another parent-led social movement that led to a shift in attitudes, in that case around driving under the influence. Anybody, Republican or Democrat, can sympathize with a terrified parent, she says.

“How do you as a Republican lawmaker counter the argument: my child is sick and will die if you pass this bill?” she says. “It’s extremely difficult to pivot on that into any kind of political speak that doesn’t make you sound like an asshole. It’s perfect.”

Framing the debate as a decision on kids’ lives raises the stakes — especially when their parents are the ones doing the framing. “It seems much more immediately pressing than the threat that someone might lose their healthcare,” says Doug McAdam, professor of sociology and political science at Stanford and author of Deeply Divided: Racial Politics and Social Movements in America. “It does have this stark quality. Somebody’s life may well be hanging in the balance.”

Parents of sick children have always been the fiercest advocates for their kids, but as the fight over the Affordable Care Act intensified this year, that fight became political as well as personal. Parents of 10-year old Eden Reck confronted Rep. Barbara Comstock (R-VA) during the House health care battle this winter. And in early May, late night host Jimmy Kimmel urged Congress to protect health care for kids like his son, who was born with a heart defect. On Sunday, Kimmel tweeted to Sen. Bill Cassidy (R-LA) to remind him of his promise to follow the “Kimmel Test,” which is to guarantee care for all children born with congenital heart disease during the first year of their life, regardless of cost.

Chandra sees her son’s condition as the perfect example of that issue. “It happens in utero at around 8 weeks,” says Chandra. “So please stop preaching to me about personal responsibility. It’s hard to tell an 8-week old fetus to be more personally responsible with their organs.”

Chandra says the health care debate has become too divided, that too many people think of sick and disabled people as “other people” in a polarized war between “us” and “them.” “It’s me today, but it could be you tomorrow,” she says. “You are one accident, one diagnosis away from you being ‘other people.’ I am ‘other people’ now, and you can be too.” 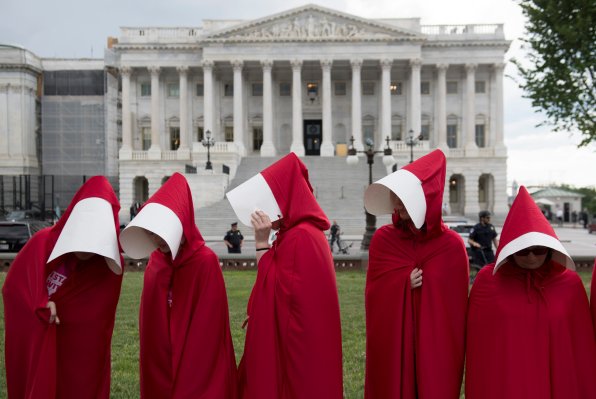