The Supreme Court on Monday announced it would allow parts of President Donald Trump’s proposed travel ban to go into effect until it hears arguments from both sides in October.

The move will reinstate many restrictions on travelers seeking to enter the United States from six Muslim-majority countries: Syria, Iran, Libya, Sudan, Yemen and Somalia.

However, the Court left open room for case-by-case exceptions, potentially setting up a confusing and contentious situation for travelers.

Here are three things to know about the President’s travel ban as it’s set to be partially reinstated on June 29.

It’s unclear who will have “bona fide” ties to the U.S.

In its unsigned opinion, the Supreme Court said it would uphold the travel ban’s restrictions with the exception of those who have “a credible claim of a bona fide relationship with a person or entity in the United States.” Certain people qualify for such claims, such as a family member of someone living in the country, a student who has been accepted to an American university or a worker who has been offered employment by an American company.

But beyond that, the definition of a “bona fide relationship” becomes murky. What about a close friend seeking to visit from one of the affected countries? Or, as Temple University clinical law professor Jennifer Lee points out, refugees?

“They have no ties to the U.S., no jobs lined up or familial connections, but are fleeing persecution and now are subject to this problematic definition of ‘bona fide,'” Lee said.

Indeed, Justice Clarence Thomas, who was joined in part by Justice Samuel Alito and Justice Neil Gorsuch, wrote in a partial dissent that the Court’s compromise was “unworkable.”

“The compromise also will invite a flood of litigation until this case is finally resolved on the merits, as parties and courts struggle to determine what exactly constitutes a ‘bona fide relationship,’ who precisely has a ‘credible claim’ to that relationship, and whether the claimed relationship was formed ‘simply to avoid’ [Trump’s executive order],” Thomas wrote.

Lee said that refugees may still be able to gain entry under a waiver detailed in the executive order that allows government officials to admit foreign nationals on a case-by-case basis, even though most of the approvable circumstances involve people with those same bona fide relationships.

“It’s unclear what the [Trump] Administration will do, but the waivers could still come into play,” said Adam Lauridsen, a partner at firm Keker, Van Nest & Peters working alongside the American Civil Liberties Union (ACLU). “There could be refugees who don’t have family members in the U.S. who are admitted because they are in life-threatening situations.”

The travel ban ruling is unlikely to cause chaos at airports

After Trump signed the executive order enacting the first version of his proposed travel ban in late January, some inbound travelers found themselves stuck in legal limbo at airports. Two Iraqi refugees, for example, were held up at New York City’s John F. Kennedy International Airport, leading thousands of activists to gather in protest on the airport grounds.

This time should be different, according to Bruce McIndoe, president of travel risk management and security company iJET International. “This is not going to be a chaotic mess like we saw earlier this year,” he said. “[This version] is limited, and the Administration is going to be a little more savvy about its implementation.”

McIndoe said that he still expects protestors to organize at “relevant locations” like airports, but that airlines are more prepared this time around. At the time, some airport and Homeland Security officials around the country were confused as to how to carry out the ban’s strict measures. Some were unsure if green card holders were included in the ban, for instance.

“[Airlines] are actually happier that this version of the travel ban is not being thrust on them with no preplanning. It was very difficult in January, but this time around it’s going to be more of a processing issue that takes place before [travelers] even land,” McIndoe said. “Once people have the appropriate documentation, the airlines are good to go.”

The Supreme Court’s timing could make the entire case moot

In its decision, the Supreme Court said that the 90-day ban on travelers from the six countries would begin June 29. Additionally, a 120-day ban against nearly all refugees regardless of origin will go into effect on the same date.

But the Court won’t hear the case until October, beyond the end of either window. That means the case may be moot by the time of oral arguments.

“Both bans are done on a calendar basis and will eventually have to reset,” an attorney affiliated with the ACLU said. “They may be expired by the time the case enters the Supreme Court, setting up a situation where the arguments being presented are moot.”

If a matter is moot in the court of law, it has no practical value and is generally viewed as purely academic or theoretical. Therefore, the Court may not issue an official judgment on the travel ban or perhaps decide to not hear the arguments at all, according to the attorney.

The Court has not yet set a firm date for oral arguments in the case. But as the next term draws closer, all eyes will be watching the Justices’ plans closely. 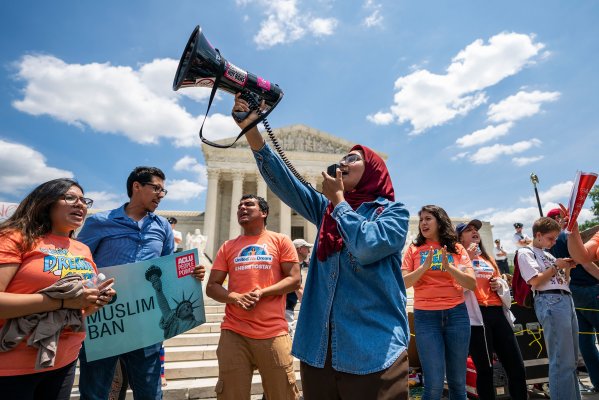