Most of the World Has Little Confidence in Donald Trump, Poll Finds

Global confidence in Donald Trump’s presidency is as low as 22%, down from the 64% confidence shown in former president Barack Obama.

According to a new Pew Research Center poll, which was conducted among 40,447 respondents spanning 37 nations, fewer than a quarter of respondents think President Trump will do the right thing in terms of international affairs. The ratings of the U.S. president fell in every country surveyed (including America’s allies in Europe and Asia) apart from Russia and Israel.

When respondents were asked their views of President Trump’s characteristics, 75% of the people surveyed said they thought of him as “arrogant,” 65% said “intolerant” and 62% said “dangerous.”

In contrast, 55% of respondents described Trump as “a strong leader,” 39% said “charismatic” and 26% said “well-qualified to be president.” Just 23% said they thought Trump “care[d] about ordinary people.”

Despite 22% of respondents having confidence in President Trump, a median of 58% of those surveyed said they had a favorable opinion of Americans and roughly 66% across the countries surveyed said they like American music, movies and television.

Pew Research Center has been conducting surveys on the image of the U.S. abroad since 2002.

The center saw another significant leap when George W. Bush’s administration changed to Obama’s in 2009 — although that was a positive change, rather than a negative one. 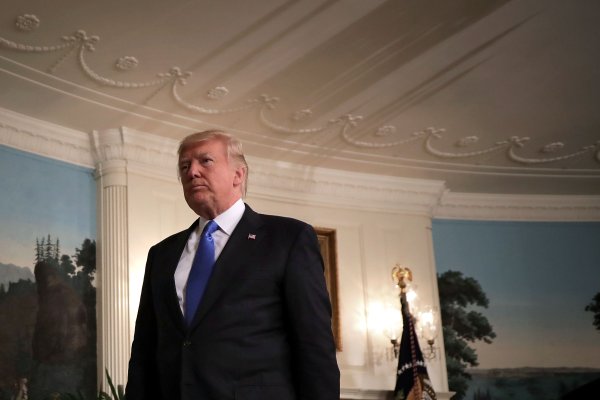 Trump Is Rallying in an Iowa County That Clinton Won
Next Up: Editor's Pick