Russell Westbrook of the Oklahoma City Thunder after winning the Most Valuable Player of the Year award at the 2017 NBA Awards Show, on June 26, 2017 in New York City.
Steven Freeman—NBAE/Getty Images
By Melissa Chan

A limited version of President Donald Trump’s travel ban can go into effect until the Supreme Court hears a legal challenge about it in October, the high court said. The 90-day ban on visitors from six countries can be enforced on foreigners except for those with a “bona fide relationship with a person or entity in the United States.”

The White House said Syria may be planning another chemical attack and warned Syrian President Bashar Assad that he and his military “will pay a heavy price” if it’s carried out. The U.S. “has identified potential preparations” for another attack, according to Press Secretary Sean Spicer.

Russell Westbrook was named the NBA’s most valuable player this year. The Oklahoma City Thunder star had set a record with 42 triple-doubles during the season, according to the Associated Press.

The Senate health care bill would result in 22 million uninsured by 2026, according to the Congressional Budget Office.

Google has been hit with a $2.7 billion fine in the EU antitrust case.

America’s global image has plummeted under Trump, a survey has found.

The Utah wildfire has grown to become the largest active fire in the U.S.

The professor who said former North Korea captive Otto Warmbier got “what he deserved” is now out of a job.

Cheetos might just pay you $50,000 for your weird-shaped snacks. 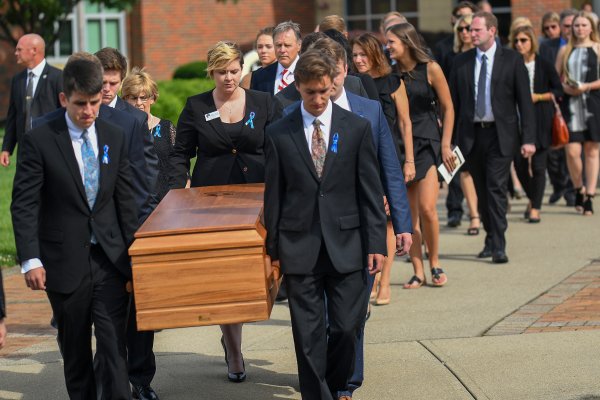