Confederate Monuments and the Forgotten Warning of a Crisis to Come

As many cities debate what to do about monuments to Confederate leaders and soldiers, defenders of such monuments commonly claim they “have nothing to do with hate or racism but everything to do with our history and heritage,” as a Tampa resident proclaimed Wednesday to his county commissioners before they voted to keep a nearby monument.

But not every aspect of that heritage and history is well known. And residents of the American South have been debating their very heritage and the historic ideas for which the Confederacy stood even before those 11 states seceded in 1861. There is no better proof of that divide than a book that was published 160 years ago Monday, on June 26, 1857: The Impending Crisis of the South: How to Meet It by Hinton Rowan Helper. The book and the author have long been forgotten in popular memory. But Helper’s Impending Crisis of the South is the only book other than Harriet Beecher’s Stowe’s Uncle Tom’s Cabin that historians have kept in their bag of causes of the Civil War.

Better than any book of the tumultuous 1850s, Helper’s book circulated the ten-year-old rope that slaveholders feared could bind together non-slaveholding white people above and below the Mason-Dixon line. The rope had a name: free (white) soil.

“Freesoilers and abolitionists are the only true friends of the South; slaveholders and slave-breeders are downright enemies of their own section,” Helper unabashedly declared in The Impending Crisis. “Anti-slavery men are working for the Union and for the good of the whole world; proslavery men are working for the disunion of the States, and for the good of nothing except themselves.”

Helper was a native of North Carolina. At 9 months old in 1830, his minor slave-holding father died, and failed to bequeath any riches. He learned to write at a nearby academy, but flunked as storekeeper. He migrated to New York City in search of riches in 1850. Jobs eluded him, so he rushed to California for his fortune.

He came back east empty handed, feeling duped by the promoters of the gold rush. Frustrated, he became “the antipromoter,” as historian George M. Frederickson termed him. In 1855, he released The Land of Gold, discouraging migration to California, exposing “its rottenness and its corruption.” But his anti-promotion of California paled in comparison to his anti-promotion of the South. Like California, his native land had failed him and millions like him.

Helper pierced the heart of slaveholding society in The Impending Crisis of the South. He knew that the small group of enslavers of four million people depended on the loyalty of the roughly five million non-slaveholding whites to keep their system going. Helper tried to mobilize these poor and humble white people against this small slaveholding aristocracy.

Helper was no antiracist. He did “not believe in the unity of the races,” and he called for black people to be sent back to Africa. But Helper was an abolitionist. Slavery shackles industrialization, he argued, holding back economic progress and the opportunities of non-slaveholding whites.

Horace Greeley, the nation’s most powerful editor, promoted the book in the nation’s leading newspaper, the New York Tribune. On March 20, 1858, Senator Henry Wilson of Massachusetts cited the book in a Senate debate on slavery. Energized, Helper and Greeley partnered in soliciting funds and Republican endorsements to produce a smaller, inexpensive version to distribute during the political campaign of 1860. Published in July 1859, the mass-market version became an instant bestseller in antislavery circles and an instant dartboard in proslavery circles, polarizing the nation as have few books in American history.

By December 1859, the New York Tribune, the main distributor of The Impending Crisis, was mailing off 500 copies a day. Some of those copies reached southern towns where the book became like an illicit drug. Southerners were arrested and jailed for possessing a copy. Southern Congressmen spent the winter of 1859-1860 denying Ohio Representative John Sherman the Speaker of the House position because he had endorsed the “insurrectionist and hostile” book.

The Impending Crisis gave secessionists the proof they needed to argue that the Republican Party, which had branded itself as the party of free white soil, was on its way to forming “an Abolition Party in the South of Southern men,” as the Charleston Mercury feared. If that happened, “The contest for slavery will no longer be one between the North and the South. It will be in the South, between the people of the South.”

That warning rang out all over the pro-secessionist South in the lead up to the 1860 election. And so, when Abraham Lincoln’s Republicans won the White House and Congress, rich slaveholders fled the Union. As the Confederate States of America, they waged a war of independence that caused more American deaths than any war in American history and left so many southern whites in such dire poverty that they rioted repeatedly for food.

A rogue nation resolutely against free white soil, the four-year-old Confederacy turned out to be the impending crisis Helper warned white southerners about. And now, 160 years later, as some of their descendants resolutely defend the Confederacy in the name of their history and heritage, we can only guess what Helper would say. He might see fit to warn his fellow Americans anew about another impending crisis of the south.

Ibram X. Kendi is the National Book Award-winning author of Stamped from the Beginning: The Definitive History of Racist Ideas in America and Professor of History and International Relations at American University. 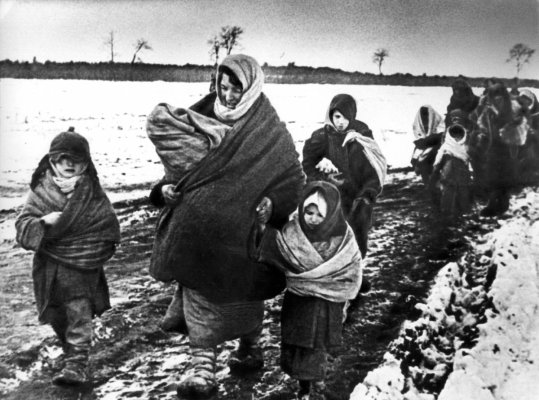 Lessons of the 20th Century's Most Famous Refugee Crisis
Next Up: Editor's Pick