Trump Has China to Thank for Recent Coal Industry Spike

President Trump declared victory for the coal industry—and his effort to save it—before a roaring audience during a rally in Cedar Rapids, Iowa last week.

“We’ve ended the war on clean, beautiful coal. And we’re putting our miners back to work,” he told a crowd at a rally in Iowa last week. “You read about it, last week a brand new coal mine just opened in the state of Pennsylvania, first time in decades, decades.”

Trump has explained the spike in coal mining as the result of the Trump administration’s vast effort to deregulate the industry, but in fact deregulation has had little effect on the industry’s improved performance, at least thus far. To understand the change, analysts point to Beijing rather than Washington. Last year, Chinese policymakers restricted the hours that the country’s coal mines can operate, leading to a drop in production of metallurgical coal, which is used to produce steel. Globally, the move caused prices of that type of coal to triple. And, at that value, previously lagging American mines could profit by exporting the natural resource around the globe. Prices have fallen since then but remain significantly higher than in recent years.

“It was an economic decision first and foremost,” says Corsa Coal CEO George Dethlefsen of opening the new mine. “China restricted supply and that changed the market.” Corsa expects to export 85% of the metallurgical coal it produces this year to countries in Asia, Europe and South America, he says.

Higher prices and increased demand for metallurgical coal from China has had a notable effect on the coal industry broadly. The coal mining industry has added about 1,300 jobs since last December, according to the Bureau of Labor Statistics. And, in total, coal production increased nearly 14% year over year in the first quarter of 2017, according to data analyzed by the Rhodium Group. (The mining industry more broadly has added more than 30,000 jobs this year, a fact that Trump and administration officials have pointed to as evidence of coal’s renewed prospects.)

The growth in coal jobs comes primarily from metallurgical coal, also known as coking coal. That commodity is mined in the same regions and using the same methods as thermal coal, which is used for power plants, but it makes a considerably smaller portion of the coal-mining industry. Nonetheless the improved fortunes for metallurgical coal have driven a dramatic reversal for an industry that has been in steep decline for nearly a decade.

But analysts say that growth may not be sustained, largely because metallurgical coal remains vulnerable to policy changes in China. The Chinese Communist Party has indicated it plans vast reforms of its state-owned enterprises, including domestic coal producers. But what form those reforms will take—and how they will affect U.S. coal—remains unclear. Analysts say that an inevitable decline in Chinese growth will slow met coal demand, even if that slowdown does not come for years.

“There will continue to be some fluctuations in Chinese coal policy going forward,” says Jason Bordoff, an Obama energy advisor who runs Columbia University’s Center on Global Energy Policy. “But we should continue to expect much weaker coal demand growth in China, and that’s going to weigh heavily.”

In the meantime, Trump is doing everything in his wheelhouse to prop up the industry. Some of those moves—like his reevaluation of the Clean Power Plan—will pay dividends to the coal industry in the long run, saving some coal-fired power plants from closing. But the rollback has had little immediate impact, largely because the regulations he has targeted have not taken effect. And, in the long term, power producers will continue to build wind, solar and natural gas plants since they have become cheaper to operate than coal-fired power plants.

“Very little of this is U.S. federal policy,” says Peter Marsters, an analyst at the Rhodium Group who focuses on energy issues. “That’s a minor concern for coal producers at the end of the day.”

Coal producers have nonetheless offered universal praise for Trump’s regulatory rollback, which will eventually improve the industry’s fortunes. Data from the Energy Information Administration (EIA) show that repeal of the Clean Power Plan will lead coal use in the electricity sector to flat line in the coming decades. That’s good news for an industry that has grown accustomed to non-stop decline. But, at the same, the coal industry is expected to continue to lose jobs, largely due to mechanization and more efficient mining techniques.

“There are some intangible benefits of the administration being openly supportive of coal,” says Dethlefsen. “It has an impact on investor sentiment, and has allowed many coal companies to raise money.”

Companies have responded to the new demand by revamping shuttered mines and in some cases opening new ones. Corsa Coal plans two more metallurgical mines in as many years on top of the one it opened in Pennsylvania this month. Alpha Natural Resource plans to open a new metallurgical mine in West Virginia. Other companies have simply ramped up production.

This uptick has reinvigorated coal communities and local economies—even if coal will never return to its glory days. “There’s real hope and real optimism from the standpoint of metallurgical coal,” West Virginia Governor Jim Justice told TIME earlier this year. But “you’re still going to have thousands and thousands of displaced miners.”

—with reporting by Charlie Campbell/Beijing 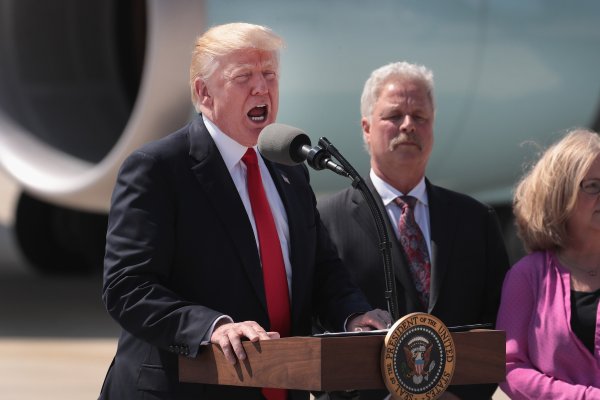 Trump Stands By Health Bill
Next Up: Editor's Pick