President Trump's Obsession With Loyalty Is Bad for the White House

Ideas
By Chris Lu
Lu served as the U.S. Deputy Secretary of Labor during the Obama Administration and is a senior fellow at the University of Virginia Miller Center.

The White House is working hard to find a new press secretary. It’s ordinarily one of the most coveted positions in politics, but no one seems to want it.

That’s not surprising given the way that Sean Spicer, the current occupant of the position, has been pilloried by the press and late-night comics. Very tellingly, in a recent survey, only 6% of public relations professionals said they would take the job of press secretary or deputy press secretary in the Trump White House.

It’s not just the long hours and the constant scrutiny that make the job so difficult to fill. The press secretary must also possess large amounts of the trait most desired by this president: loyalty.

In the private sector, Donald Trump demanded almost familial loyalty — some would say blind loyalty — from employees and business associates. In a 1992 interview with Charlie Rose, Trump declared that he “would’ve wiped the floor with the guys who weren’t loyal.” When Rose asked what constituted disloyalty, the businessman responded, “They didn’t come to my aid. They didn’t do small things that would’ve helped.”

It’s not surprising then that the President told FBI Director James Comey at a private dinner in January: “I need loyalty. I expect loyalty.” Trump administration insiders understand well their boss’ expectations.

Over the past five months, Spicer has tied himself into knots to prove his fealty to the President. The day after the Inauguration, Spicer gamely tried to spin the press on the crowd sizes at the Obama and Trump inaugurations. In May, when Trump tweeted “covfefe” after midnight, Spicer refused to admit a misspelling, instead saying, “The president and a small group of people know exactly what he meant.”

At a recent meeting of the Trump Cabinet, accomplished public servants — including military leaders and business executives — fell over themselves to heap praise on the President. The Cabinet members took turns declaring their allegiance to Trump, dishing out flattery, and even calling it a “blessing” to serve him.

In contrast, in the 16 Cabinet meetings I ran during Barack Obama’s first term, we never asked the Cabinet to sing our president’s praises. We knew Obama wanted candid advice, not adulation.

In a family business like the Trump Organization, it’s possible for the CEO to surround himself with sycophants. But unwavering loyalty has its limits in a government of co-equal branches, where new federal employees take an oath to “support and defend the Constitution of the United States.”

Even in the best-run administrations, it can be challenging to find capable people willing to take a pay cut and undergo the scrutiny that comes with political jobs. For the really hard jobs in government — the ones that manage billion dollar programs, safeguard the country, and oversee the economy — a litmus test of blind loyalty reduces the pool of experienced candidates and limits the diversity of perspectives.

Already, we’ve seen the White House veto selections for senior positions because the proposed pick criticized Trump during the campaign. Elliott Abrams was nixed for the number two spot at State because of “Donald Trump’s thin skin and nothing else.” For positions at the Pentagon, “any hint of something negative about Trump” that a potential appointee has posted on social media “can be disqualifying.” In a stark example of the value placed on loyalty, a Trump family wedding planner with no experience in housing is a top candidate to oversee billions of federal housing dollars in New York and New Jersey.

Barack Obama took a different tack. He understood that in order to solve the serious problems in our country, you needed experienced voices around the table that were willing to express disagreement. It didn’t matter that the person had previously supported another presidential candidate.

One area where Trump has succeeded in bringing in top-notch talent — at least in very senior roles — is national security. Respected generals like Defense Secretary James Mattis and National Security Advisor H.R. McMaster understand well that the Commander in Chief sits above them in the chain of command. They also know that being a loyal subordinate doesn’t mean being a yes man.

Loyalty, however, is a two-way street.

Last month, in a speech to NATO leaders, Trump blindsided McMaster, Mattis and Secretary of State Rex Tillerson by removing a line in the speech that affirmed the United States’ 70-year commitment to the alliance. This undermining of the national security team will strain the loyalty of officials whose hard-earned reputations are providing credibility to Trump’s policies.

Likewise, despite the recent victory in a Georgia special election, House Republicans will remember a President who twisted their arms to pass a health care bill but is now criticizing the bill as “mean” in order to achieve a more palatable Senate version.

If the President wants to find long-term success, he would do well to understand that loyalty in D.C. is transactional, ephemeral and fickle. If he has a desperate need for lasting loyalty, he should follow Harry Truman’s famous adage that “if you want a friend in Washington, get a dog.”

Lu was the Deputy Secretary of Labor and White House Cabinet Secretary during the Obama Administration. He is a senior fellow at the University of Virginia Miller Center. 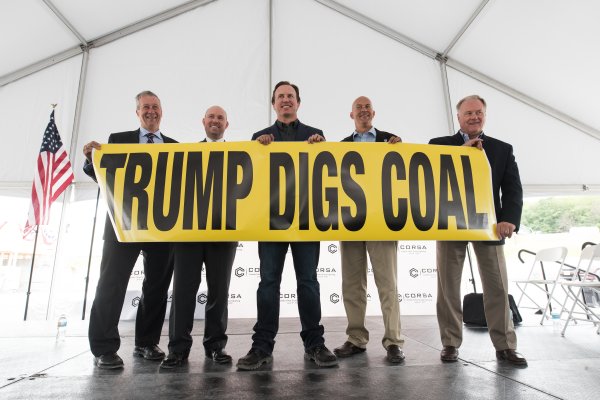 Trump Has China to Thank for Recent Coal Industry Spike
Next Up: Editor's Pick