Emmy Award winner Eric McCormack is known for providing comedic relief on Will & Grace, but now the actor is teaming up with other performers to highlight a very serious issue.

McCormack, 54, alongside Tony nominee Terrence Mann and Oscar nominee Tess Harper, will be featured on a new concept album entitled GUNS: The Album.

“I was thrilled to contribute, in my small way, to this project,” McCormack tells PEOPLE exclusively. “Musically, it is brilliant and soaring and ambitious as hell. Culturally, it is downright crucial.”

McCormack lends his voice to the song “Welcome to the Gun Show.” Described as “a mix of filmic anthems, bold hip hop, flashy show tunes and more that touch on all sides of the debate,” the album aims to spark conversation amidst the huge controversy of American gun control and gun violence.

As fraught as the gun debate in America has become, creators Braxton Molinaro and Jonathan Sokolow say that the release of this album hopes to get more people talking about how firearms impact our society, as well as create more accessible ways for people to learn the truth about these weapons.

“By using music to contribute to the debate, we hope Americans can connect with one another through these songs and eventually find common ground when it comes to the issue of guns,” Molinaro says.

According to the creators, the songs on the album are expected to encompass the “vast and ever-evolving” perspectives on the gun debate. Some of these include the practicality in controlling the amount of firearms in the country, the easy process in which one can acquire a gun (“American Gun”), the traditional use of guns in hunting (“Thrill of the Hunt”) and the mass shooting epidemic from a survivor’s perspective (“On Columbine”).

Pre-order is available now at GUNSthealbum.com and will be released on all commercial music networks, including iTunes, SoundCloud and Spotify on June 22. But PEOPLE has an exclusive premiere of the haunting first single, “300,000,000” featuring vocals by Aleque Reid, Dan Henig and Bethany Thomas.

“We understand that with 300,000,000 guns in this country, it would be impossible and unrealistic to simply eliminate their presence,” says Sokolow. “This album is not meant to be pro or anti-gun, but to promote gun control and education about this issue.”

On Thursday night, a live performance of the banner song “300,000,000” will take place at The International Thespian Festival in Lincoln, Nebraska, the largest youth theatre festival in the country. An audience of 5,000 people is expected and a student choir and dancers from Bradford High School in Kenosha, Wisconsin, will also perform during the song. 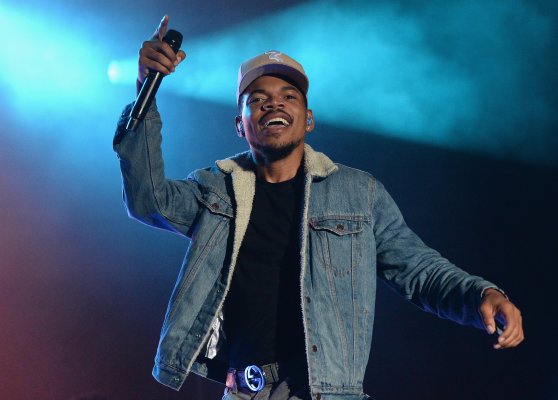 Chance the Rapper Apologizes for 'Disrespecting' Dr. Dre
Next Up: Editor's Pick