Review: Something Twisted This Way Comes in The Changeling

Apollo Kagwa is adjusting to fatherhood while his wife, Emma Valentine, suffers terribly from what seems like postpartum depression. The creature in the crib, she insists, is not her baby. Turns out it’s not just in her mind.

Victor LaValle’s novel The Changeling borrows from the fairy tale and horror genres, turning New York City into a landscape of fanciful and all-too-real dangers: witches, trolls and racist cops suspicious of black men like Apollo. Old-fashioned fables are a handy framing device for this modern tale. Although Apollo and Emma have a charmed love story, their “happily ever after” goes awry when Emma gives birth on a subway car that’s stalled between stations. (Their eagerness for the child, followed by later parenting blunders, recalls the couple whose daughter is snatched in Rapunzel.) News reports of this unusual delivery, combined with Apollo’s overeager social-media posts about his son, lead a predator to their home. (You might think of Hansel and Gretel or, as LaValle explains, vampires who enter a home only by invitation.) “You leave a trail of bread crumbs any wolf could follow,” one villain muses, “then act shocked when the wolf is outside your door.” After one particularly violent scene, Emma joins a band of women hiding on an island in the East River. “People call us witches,” says their leader. “But maybe what they’re really saying is that we were women who did things that seemed impossible.” Perhaps the most genius literalization of myth is an Internet troll who turns out to have ties to an actual troll.

The combination of Grimm-ish allusion and social commentary might seem pat in the hands of less capable authors, but LaValle executes the trick with style. “Fairy tales are not for children,” as one character explains. “They didn’t used to be anyway. They were stories peasants told each other around the fire after a long day, not to their kids.” To that end, LaValle has written a story full of things to terrify not children but the parents who lose sleep worrying about how best to protect them. 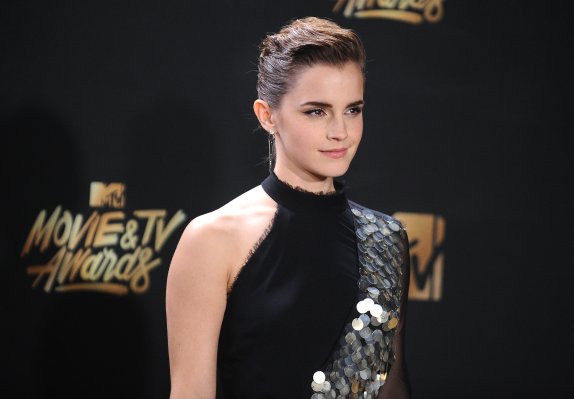 Emma Watson Is Back to Hiding Books with The Handmaid's Tale
Next Up: Editor's Pick