The new Netflix series GLOW, which stars Alison Brie as a struggling actor who becomes a pro-wrestling star, drew its inspiration from a real-life women’s wrestling TV program that was popular in the late 1980s.

In the Netflix comedy, Brie plays Ruth, an out-of-luck actor seeking the kind of meaningful roles that typically go to men. Instead, she winds up starring on a campy wrestling TV show called GLOW, which stands for Gorgeous Ladies of Wrestling, and is loosely based on the real ’80s hit show of the same name. Ruth joins 12 other women who wear over-the-top costumes, learn to wrestle and eventually compete on the television show. Executive produced by Orange Is the New Black‘s Jenji Kohan, the comedy, which premieres Friday, also stars Marc Maron as a B-movie director named Sam Sylvia, who is responsible for getting the women into shape.

GLOW creators Liz Flahive and Carly Mensch were inspired to make the show because of their fascination with the original GLOW and its unique blend of empowerment and exploitation, Flahive recently told Vanity Fair. The show, which ran from 1986 to 1990, starred women who were themselves aspiring actors looking for a way to get onscreen. They found fame by taking on flamboyant alter-egos and battling each other in the ring, as the show played up exaggerated (and not exactly politically correct) storylines.

Although Brie’s Ruth and the other characters in Netflix’s new show are not based on the real women who starred in the original show, some of the plot points are similar. According to a 2012 documentary that chronicles the rise and fall of the original GLOW through interviews with some of the wrestlers, the women had to learn how to wrestle before being thrown into the ring in full costume — just like the characters on the Netflix show.

It was brutal work, according to the original GLOW wrestlers. Once cast, the women were brought to a grimy gym. Former wrestler Lisa Moretti says in the documentary that the gym was “nasty and stinky and dirty, and the mats had blood stains on ’em, and each corner had a spittoon.” After training, the women were given stage names and split into groups that corresponded to the nature of their characters, which drew on stereotypes to define a difference between “good” and “bad” women. The character Ninotchka, for example, was a Soviet Union villain complete with a fake Russian accent.

The cast then moved to Las Vegas, where the “good” and “bad” characters lived separately. Even when they were out of the ring, the women were encouraged to stay in character. They got fined for staying out past curfew or talking to a woman from the “other” side.

“It was hard to kind of feel like you had a life,” Moretti, who played Tina Ferrari in the original GLOW, says in the documentary.

Show creator Matt Cimber, who declined to be interviewed in the documentary, was known to be particularly harsh, often calling the women fat. Patrisha King, who played the character Jailbait, recalled Cimber saying to her: “Jailbait! Your ass looks like a bunch of mashed potatoes!” Moretti compared Cimber’s behavior to that of an abusive husband, but said it came “with being a genius and creative as he was.” Many of the women said they are now able to look back on his insults and laugh.

More painful was the physical toll of wrestling. Although the storylines were produced by the show, the women did actually have to fight each other in the ring. Angelina Altishin, who played Little Egypt, tore her ACL. Laurie Thompson, who played Susie Spirits, hurt her elbow so badly, the bone tore through her skin. Getting thrown around in the ring resulted in health problems that hit some of the women decades later. Emily Dole, who played the beloved Mt. Fiji, struggles in the 2012 documentary with knee problems, which, combined with other health issues, had forced her into a nursing home.

“Wrestling is probably not the best thing for a woman’s body. It doesn’t mean that women can’t do it and do it really well. But you’re getting hit by a car every day,” Moretti says.

When the program was abruptly canceled in 1990 over financial issues, the women found themselves suddenly without work or a clear path forward. Post-GLOW, most of them changed careers entirely, becoming real estate agents, auto mechanics and accountants, among other jobs. Others continued to wrestle professionally, but nothing was ever the same as GLOW — despite the insults and injuries, the women interviewed in the documentary look back on that time as the highlight of their lives. For years, they got to wear outlandish costumes, rap on TV, show off their athleticism and form real bonds and bruises with their colleagues. The documentary ends with a reunion, where the former wrestlers see each other for the first time in about 20 years.

“I think of it as being one of the most exciting times of my life. A lot of fun — I wish it didn’t end. I still have this dream that maybe one day, just one more time, we’ll get to do it again,” says Lynn Braxton, who played the character Big Bad Mama.

Now, with the new GLOW on Netflix, at least they’ll have the chance to watch. 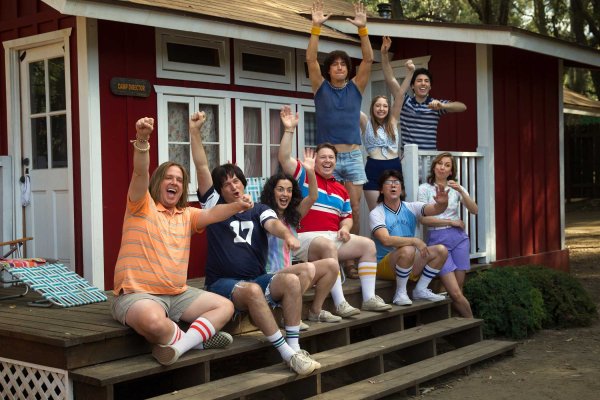