A Canadian woman at a walk-in clinic on Sunday demanded that her son be treated by a “white doctor,” launching into a rant that was captured on video as others in the waiting room accused her of being “extremely rude and racist.”

“Can I see a doctor please that’s white, that doesn’t have brown teeth, that speaks English?” the woman said in the video captured at the Rapid Access to Medical Specialists clinic in Mississauga, Ontario.

“You’re telling me there’s not one white doctor in this whole entire building?” she said to clinic staffers who told her that she would have to wait a few hours if she wanted to see a pediatrician who is white. “There’s nobody that’s Canadian? Nobody that was born here?” the woman added.

The woman, who has not been publicly identified, claimed that a previous doctor could not understand her and did not properly treat her son, who was suffering from chest pains. “He was not speaking English. His teeth were brown. I do not need his help,” she said.

The video shows witnesses in the waiting room confronting the woman, accusing her of setting a poor example for her son and telling her to seek medical treatment elsewhere.

“Seeing it so openly, without any fear, in front of so many people, without even fearing that someone can report her – it was really shocking,” Hitesh Bhardwaj, who recorded the video, told CTV Toronto.

Local police said a caller reported a woman “being verbally aggressive” while demanding a “white doctor” at the clinic on Sunday afternoon. An officer responded to the scene, but “found that no criminal offence has been committed or was in the process of being committed,” Constable Mark Fischer told CTV Toronto.

“The clinic is proud of the quality of medical care provided at this clinic,” Rapid Access to Medical Specialists said in a statement posted at the facility, declining further comment.

Ontario Premier Kathleen Wynne spoke out about the incident on Tuesday, calling it a “shocking occurrence.”

“I think we all should be shocked. If we’re not shocked, then that’s a real problem,” Wynne said. “We have to be vigilant. You know, I think sometimes we make assumptions about how far we have come in terms of being an inclusive society.”

“When one of these things happens, I think we have to step back and say, ‘OK, what is going on? Why has this happened? Where is the permission coming from for such behavior?'” she added. “There were children in that office who were hearing that behavior, and it was very, very disturbing.” 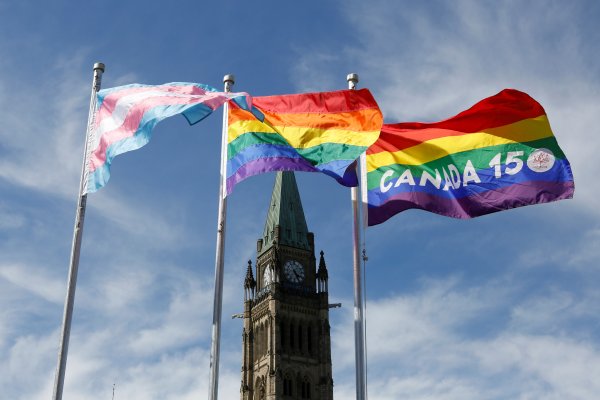