For their most recent collections, Dolce & Gabbana has enlisted youthful influencers with sizable social followings to be what they term #DGMillennials. When they tapped musician Raury for their Spring/Summer ’18 men’s runway show, however, they got more than just his 157k Instagram followers when the 21-year-old Atlanta singer staged a protest of the Italian fashion brand on their own runway. Before the finals bow, Raury removed his shirt to reveal the phrases “PROTEST DG,” “GIVE ME FREEDOM,” and “I AM NOT YOUR SCAPEGOAT” penned across his chest.

In an interview with GQ, Raury disclosed that his decision to protest came out of Dolce & Gabbana’s support of Melania Trump and their defiance in the face of backlash to their dressing the First Lady: a campaign called “Boycott Dolce & Gabbana” complete with slogan T-shirts and an advertisement where models “protested” the brand. Raury said that he didn’t know about the Trump controversy and subsequent “Boycott D&G” campaign until the day before the runway show, after he had already arrived in Milan, but felt that he had to do something about it.

“The ‘Boycott Dolce & Gabbana’ T-shirt they created completely makes a mockery of what ‘boycotting’ is,” he said. “I saw a commercial featuring the boycott T-shirt, and it looked playful and lighthearted—it was a joke. It was a troll. Me, as a young man from Stone Mountain, Georgia, the birthplace of the Klu Klux Klan, I really felt this mockery of boycotting. Who knows, if boycotts didn’t happen, if Rosa Parks and M.L.K. didn’t step up…who knows if I would even exist. Boycotting matters. Boycotting is real. Dolce’s entire campaign says it’s not real. I know that if I walk out there and support or endorse anything that sits next to Trump—or support someone who even makes dinner for Trump or whatever—then that means that I support Trump also. I don’t support Trump.”

The singer was also unhappy with the way that Dolce & Gabbana’s entrepreneurial approach to protest culture as a way to sell clothes – the fashion house also released videos of mock protests. Likewise, a similar criticism was leveled at Pepsi after it launched a resistance-themed commercial featuring Kendall Jenner. For Raury, the brand’s apparent support of the Trump administration was also an issue.

“It was very insulting to know that Dolce & Gabbana was selling all of this millennial, pro-forward s—t, but everything that they’re doing and saying is a step backwards,” he said.

This isn’t the only controversy that has come out of the Dolce & Gabbana runway show; on Monday, Miley Cyrus and Steffano Gabbana openly clashed on Instagram after Cyrus posted an Instagram of her brother who walked in the show and a caption that denounced Dolce & Gabbana’s politics. The designers have also been criticized for their views on gay adoption and in-vitro fertilization. 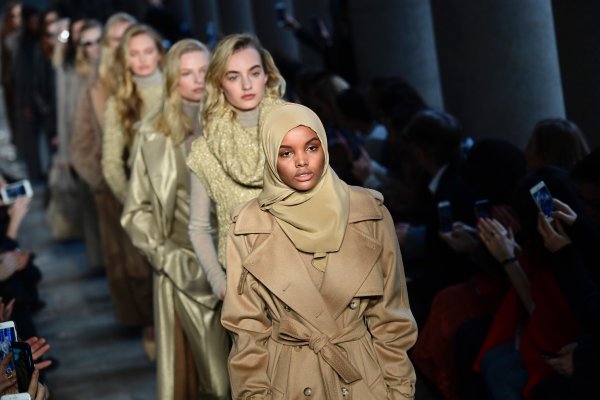 This Hijab-Wearing Model Is Confronting Beauty Expectations
Next Up: Editor's Pick