The meeting, lead by Sen. Marco Rubio, was a first-step “input” session that Rubio hopes will be the beginning of a collaboration between the White House and lawmakers on both sides of the aisle to create and pass legislation to benefit families. Tuesday’s meeting did not include any Democratic lawmakers.

Paid family leave has been a main issue for Trump, who reached out to Rubio about a month and a half ago to set up a meeting.

Rubio and Sen. Deb Fischer, who also participated in the meeting, said that the meeting was intended to make members of both chambers as well as Trump aware of potential options for creating tax credits for child care and to familiarize Trump with lawmakers who have been active on these issues.

“We’re still in the talking stage,” Fischer said after the closed-door meeting. “We’re trying to make the Administration aware of what we all have here in the Senate and the House so we can coordinate and put forward some good ideas that are going to take care of families.”

Lawmakers said that while the proposals are still in a very preliminary stage, they hope to pass the credits as part of a broader tax reform package later this year.

“That would be ideal, if there’s going to be a broad tax reform, that the pro-family component would be part of it,” Rubio said. “But I also think if it doesn’t happen we should be prepared to move independently of a broader reform. Either way, I think this needs to happen.”

As far as the specifics of any legislation go, a number of proposals are in discussion, Fisher and Rubio said. Fisher presented the plan outlined in the Stronger Families Act that she co-sponsored in February. That bill, which would offer tax credits for employers who offer two weeks of paid family leave, has drawn criticism from some Democrats who say it doesn’t go far enough. Meanwhile, Rubio advocated for the consolidation of existing child tax credits into a single, larger credit that he hopes would be easier for parents to use.

Rubio also said he would tentatively support a mandate for businesses to provide paid family leave, which has been a key component of the White House plan spearheaded by Trump.

For Rubio, who has long been an advocate of child tax cuts, Trump’s support may provide an opportunity to tackle an issue that has historically been a nonstarter for Republicans.

“I think it’s encouraging that the White House has made the concept of paid leave a priority,” he said. “How you achieve that in a way that’s responsible and not counterproductive is going to take some time.”

After the meeting, Trump tweeted that it had been a success. “Just left a productive meeting on the Hill to discuss issues affecting American working families, including childcare & paid family leave!” she wrote. 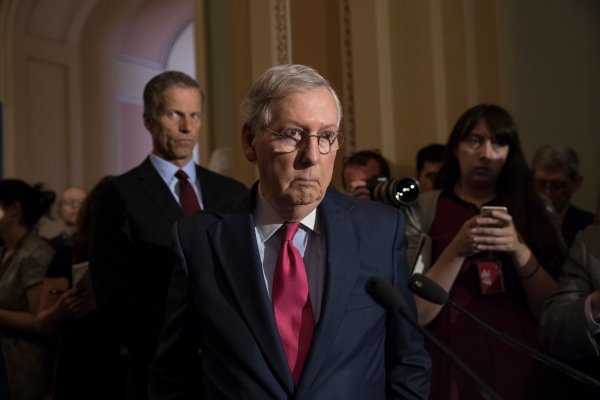