Senate Democrats presented a unified front during a protest that went late into the night on Monday, decrying the secrecy surrounding Republican efforts to craft and pass new healthcare legislation.

Taking advantage of parliamentary procedures that allow them to hold the floor into the night, Democratic Senators took turns excoriating the proposed Republican health care bill and the secrecy and speed with which they say it has been developed.

“This is probably one of the low moments of the United States Senate in the way that this process is being done,” said New Jersey Sen. Cory Booker.

A number of speakers sharply criticized what Sen. Richard Blumenthal characterized as the “unconscionable and reprehensible” secrecy with which they say the proposed bill is being debated, some sarcastically drawing parallels between the proposed legislation and President Trump’s unreleased tax returns. A small group of Senate Republicans has privately worked on the bill for weeks, declining to hold a hearing or share the text of the proposed legislation with a wider audience in the Senate.

That fact drew ire from Senators at Monday night’s protest.

“We have 13 Republicans, all men, working behind closed doors to produce legislation which will be brought to the United States Senate at the last moment so the American people don’t know the disaster that it is,” said Vermont Sen. Bernie Sanders. “So I say to the Republican leadership, what are you afraid of?”

As Washington Sen. Patty Murray noted, not only Democrats but some Republican lawmakers have been kept in the dark on the specifics of the bill, a level of secrecy that she called “absurd and unprecedented.” She noted that Trump’s Health and Human Services Secretary Tom Price said at a hearing last week that he had not seen the text of the bill.

Many Senators drew harsh comparisons to the process of passing the Affordable Care Act eight years earlier, noting that nearly 50 bipartisan hearings had been held to workshop that bill, which ultimately included 150 Republican-proposed amendments.

In their criticisms of the shrouded bill, many Senators employed impassioned stories of constituents who would be affected by cuts to Medicaid and other services. Virginia Sen. Tim Kaine, citing a meeting in which he said Trump’s budget director Mick Mulvaney said that cutting programs like Medicaid would allow people to “get off these programs and back in charge of their own lives,” was unforgiving.

“What a cruel thought. That reads like something that a villain in a novel by Charles Dickens would say,” Kaine said. “So, what, we now tell a kid who loses the wheelchair that is partly paid for by Medicaid, ‘you’re now back in charge of your own life?’”

Republican lawmakers are pushing to pass healthcare legislation before their August recess, and up against pressure to act before the long July 4 weekend. 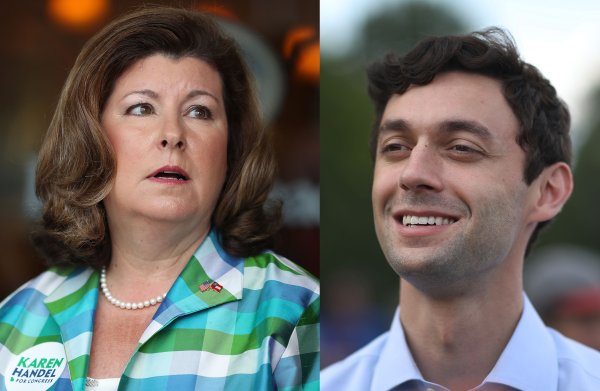 The Biggest Question About Georgia's Special Election: Who Will Turn Out?
Next Up: Editor's Pick