For eternity, women have been receiving mixed messages about who we’re supposed to be, particularly in the workplace. In the early 1990s, when I was just getting started in television news, magazine articles and advice columns told women we had to be “more like men” to find success. That meant changing things like our wardrobes, wearing pantsuits and blazers to somehow embrace our masculine sides. But just as soon as we got the hang of that, it all seemed to change. Suddenly the “secret to success” was to focus on our femininity; in the decade that followed, books, magazines and newspaper headlines told us to celebrate our best female qualities.

So which one was it?

Reading several different news headlines over the last few weeks, I found myself asking the same question again. What messages are women getting about who we’re supposed to be — and are those messages still mixed in 2017?

Let’s start with the good news.

I let out a sigh of relief when Wonder Woman became a record-breaking hit at the box office. Thankfully, naysayers wouldn’t be able to claim that a movie directed by and starring women couldn’t cut it. The film is still dominating the box office, having pulled in $572 million worldwide to date. But the big question now is whether Hollywood — where women are still underrepresented and underpaid — will learn from the Wonder Woman example.

Some positive news recently also came out of Uber’s sexual harassment probe. The company, facing allegations by former engineer Susan Fowler (and others), revealed last week that it fired 20 employees after a report by former Attorney General Eric Holder, hired by the company to investigate the claims and corporate culture. Though there’s still vast room for improvement, it appears the company is taking sexism and harassment seriously, CEO Travis Kalanick is taking a leave of absence and board member David Bonderman immediately stepped down after his alleged sexist comments came to light.

Will more women be hired for positions too often filled by men? Will more companies take measures to combat systemic sexism?

I’d like to shout a resounding “yes” to both questions. But I hesitate because, in other recent news headlines, it’s impossible to escape the mixed messages women continue to get.

Take the Bill Cosby trial, for example, which resulted in a mistrial Saturday. Andrea Constand had accused the comedian of drugging and sexually assaulting her in 2004. Dozens of other women have accused Cosby of similar crimes, some of which Cosby previously admitted to in court and others of which he denies. On the first day of the trial, Cosby had arrived with a woman standing by his side — Keshia Knight Pulliam, one of his co-stars from The Cosby Show.

It’s often an effective strategy to show women supporting a man accused of doing something horrible to women. The messaging is: “How could he have done it if other women support him?” Pulliam claimed in a television interview that she was standing by Cosby because, “That’s just not the man that I ever experienced.” Well, I too met Cosby, almost 30 years ago when I was Miss America. And like Pulliam, I didn’t experience anything untoward. But that’s not the point.

You often hear the same kind of sentiments in sexual harassment cases: “That’s not the man I know,” “He never did anything like that to me,” or, “If that kind of behavior was going on, I would’ve heard about it.” The problem is that sexual harassers and abusers don’t treat every person they come into contact with in the same way. Harassers don’t harass everyone — they often choose their targets carefully. And while we live in a country that rightly presumes that a criminal defendant is innocent until proven guilty, I believe this kind of female “support” contributes to the mixed messaging.

There is no “right” way for a woman to be — save for equal to a man. No mixed messages there.

Gretchen Carlson is a former anchor on Fox News and an advocate for workplace equality and the empowerment of women. She is the author of the forthcoming book, Be Fierce: Stop Harassment and Take Your Power Back. 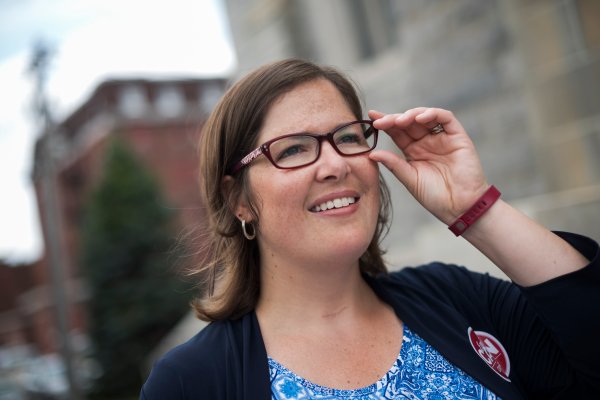 The New Director of Emily’s List Wants You to Run for Office
Next Up: Editor's Pick