Shakespeare Theaters Nationwide Are Getting Threats Amid Caesar Controversy

A woman holds her ticket to opening night of Shakespeare in the Park's production of Julius Caesar at Central Park's Delacorte Theater on June 12, 2017 in New York.
Bryan R. Smith—AFP/Getty Images
By Maya Rhodan

The Boston Globe reports theaters in Massachusetts, Texas, and Washington have gotten abusive messages ranging from death threats to accusations that the theater is responsible for the recent shooting in Alexandria, Va. that left four wounded, including Rep. Steve Scalise of Louisiana.

“We just got slammed,” the executive and artistic director of Shakespeare Dallas Raphael Parry told the Globe. “It’s pretty amazing the vitriol, the wishing we would die and our family would die. A whole lot of them say that we should burn in hell.”

The various Shakespeare theaters across the country are not linked to the New York performance.

The Public Theater in New York has been staging a production of Shakespeare’s Julius Caesar with a Trump-like figure in the titular role. The interpretation has been met with criticism from those offended by the scene in which Caesar is assassinated by a group of senators. A pair of protestors interrupted Friday’s performance and were heard shouting “Stop the normalization of political violence against the right!” and “you are inciting terrorists.”

The Public Theater’s artistic director recently responded to the controversy by saying the organization does not advocate violence. “This play, on the contrary, warns about what happens when you try to preserve democracy by nondemocratic means,” said the director, Oskar Eustis. While the assassination scene is the play’s most well-known moment, it also portrays the Roman Empire descending into chaos after Caesar is killed. 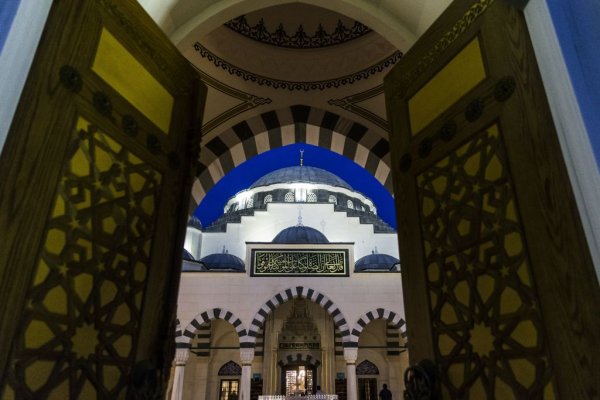 Muslim Teenager Killed in Virginia
Next Up: Editor's Pick