A U.S. Warplane Shot Down a Syrian Jet. Here's Why That's a Big Deal

An American fighter jet shot down a Syrian government bomber in the eastern part of the country on Sunday, in one of the clearest signs yet of an open conflict between the United States and the regime of Syrian President Bashar Assad.

The downing of the Syrian plane raises the possibility of future fighting between pro-Assad forces and U.S. forces that are deployed in Syria in support of Syrian militias battling the Islamic State.

During the first six years of the Syrian crisis, the United States supported rebel groups fighting Assad, but avoided direct conflict with his forces. That changed on April 6 when U.S. President Donald Trump ordered a cruise missile attack on a Syrian air base in response to a chemical attack that killed more than 70 people including civilians. Now, it has engaged in air-to-air combat in Syria for the very first time.

Russia, whose armed forces offer critical support to the Assad government, threatened retaliation. In a statement, the Russian defense ministry said it would regard any U.S. coalition aircraft detected west of the Euphrates river in Syria as legitimate targets. The ministry called the downing of the Syrian jet “a cynical violation of Syria’s sovereignty.” Moscow also shut down the “deconfliction” channel designed to prevent midair contact between Russian and American warplanes in the skies over Syria.

As a result, the shooting down of the jet suggests a redrawing of the contours of the Syrian conflict. As the United States deepens its involvement in the ground war against ISIS in eastern Syria, it finds itself in direct conflict with the government in Damascus, and possibly with Moscow. The incident raises the risk of a wider, regional conflagration as the U.S. Assad, Russia, and Iran maneuver for control and influence in territory reclaimed from ISIS in eastern Syria.

The U.S. military said that it shot the Syrian plane down in order to protect American-backed Syrian militia forces from an attack by pro-regime troops. It military has now struck pro-regime forces at least four times, including the cruise missile strike on Shayrat airbase in Syria’s Homs province in April.

The shooting down of a jet marks an escalation, however, as conflict spirals among rival powers for control of eastern Syria. In its campaign to dislodge ISIS, United States supports the SDF, a Kurdish-majority militia force who now control a major portion of northeast Syria. Supported by an estimated 1,000 U.S. Army soldiers and marines, those forces are currently advancing on ISIS’ de facto capital in the city of Raqqa.

The coalition said it struck the Syrian plane in order to protect allied forces in a “show of force.” Following the initial Syrian airstrike, the coalition also said it contacted the Russian military, which supports Assad’s forces, in order to de-escalate the situation. The statement did not mention the fate of the pilot of the Syrian aircraft. “The Coalition’s mission is to defeat ISIS in Iraq and Syria,” the statement added. “The Coalition does not seek to fight Syrian regime, Russian, or pro-regime forces partnered with them, but will not hesitate to defend Coalition or partner forces from any threat.”

In a communiqué carried by state media, the Syrian military called the downing of the plane an act of “flagrant aggression,” adding that it “reveals the evil intentions of the U.S. in administrating terrorism and investing it to pass the U.S.-Zionist project in the region.”

Assad, who has stated that his aim is to retake all of Syria, has never granted his consent to the expanding U.S. military operation against ISIS. Sam Heller, a Beirut-based analyst at The Century Foundation tells TIME that the government attack on SDF forces on Sunday is a sign that Assad aims to disrupt the U.S.-led campaign in eastern Syria. “All the initiative is on their end,” he says. “What we do is likely to continue to be entirely reactive, and then hopefully it doesn’t accidentally escalate into something that is larger and impossible to control,” he adds in a phone interview.

In another sign of rising tensions, Iran fired missiles into Syria, saying it struck ISIS targets in response to a gun and bomb rampage carried out by the group in Tehran on June 7. Iran is a key supporter of the Assad regime, although there was no indication the missile strike was related to the downing of the Syrian plane.

The incident also underscores a strategic dilemma for U.S. commanders and officials handling Syria. Even if the American-backed campaign succeeds in expelling ISIS from its territories in Syria, the Assad regime will remain in its rump state, and the larger Syrian civil war will remain unresolved. “Stomping on ISIS is not a vision for a future Syria,” says Heller.

Throughout eastern Syria, the United States is competing with Damascus for control of territory seized from ISIS. Assad’s forces declared a key victory on June 9 when they reached the Syrian-Iraqi border northeast of al-Tanf, where the U.S. garrison is located. The maneuver effectively blocked American-backed Syrian rebels from advancing north against ISIS, thwarting future gains in that region for America’s allies.

Former U.S. President Barack Obama called on Assad to step down in 2011 as a popular uprising consumed Syria during a year of revolt across the Arab world that ejected the autocratic leaders of Tunisia, Libya, Egypt, and Yemen. As Syria’s revolution turned to war, the U.S. sided with armed opposition groups, but stopped short of directly attacking Assad’s forces. Bolstered by Iranian, Russian, and other foreign support, Assad managed to halt and reverse some of his losses, recapturing the crucial city of Aleppo in December 2016, effectively ending the rebels’ hopes of winning the war outright.

In 2014 the United States launched a campaign of airstrikes against the Islamic State in Iraq and Syria, shifting the focus of American policy away the binary conflict between Assad and the rebel groups, and toward the fight against ISIS, which is now concentrated in the eastern half of the country.

Speaking on Monday Russian Foreign minister Sergey Lavrov chided the United States for not cooperating with the Assad government in its operations against ISIS. “Any actions ‘on the ground’, and there are many participants there, including those who carry out military operations, should be coordinated with Damascus,” he said, according to Russia’s TASS news agency. 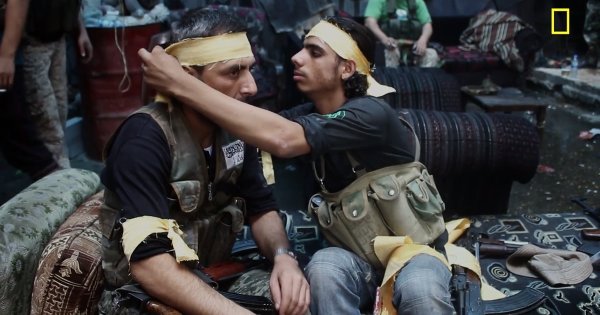 'Hell on Earth': A New Documentary on Syria Traces the Rise of ISIS
Next Up: Editor's Pick