People arrive for the opening night of Shakespeare in the Park's production of Julius Caesar at Central Park's Delacorte Theater on June 12, 2017 in New York. A New York production of Shakespeare's "Julius Caesar" drawing parallels between the assassinated Roman ruler and Donald Trump was in the eye of a growing storm, abandoned by corporate sponsors and sparking debate about freedom of expression. The play, which first opened in Central Park on May 23 and runs to June 18, has attracted right-wing outrage for similarities between the way Caesar is depicted and the Republican commander-in-chief, who is hugely unpopular in New York. / AFP PHOTO / Bryan R. Smith (Photo credit should read BRYAN R. SMITH/AFP/Getty Images)
BRYAN R. SMITH—AFP/Getty Images
By Aric Jenkins

Two protesters disrupted a production of Julius Caesar during New York City’s “Shakespeare in the Park” Friday, with one storming the stage during the play’s climactic assassination scene.

The stage-crasher, who identified herself as Laura Loomer — and describes herself as a journalist in her Twitter bio — burst onto the platform yelling, “Stop the normalization of political violence against the right! This is unacceptable!” before being removed by security.

Moments later, a second protester identified as Jack Posobiec stood up in the crowd and gestured, screaming: “You are all Goebbels! You are all Nazis like Joseph Goebbels… you are inciting terrorists,” likening the audience to the Nazi propaganda minister who aided Adolf Hitler.

“The blood of Steve Scalise is on your hands,” Posobiec added, seemingly blaming the crowd for the shooting of the Congressman in Alexandria, Va., earlier this week. Posobiec recorded the incident himself before being escorted out and later posted the video on Twitter.

The New York Police City Department said Loomer was charged with criminal trespass and disorderly conduct. She was released later that night, according to the New York Times.

“Two protesters disrupted our show tonight; we stopped the show for less than a minute and our stage manager handled it beautifully,” the Public Theater, who oversees the “Shakespeare in the Park” productions, said in a statement. “The staff removed the protesters peacefully, and the show resumed with the line ‘Liberty! Freedom!’ The audience rose to their feet to thank the actors, and we joyfully continued. Free speech for all, but let’s not stop the show.”

Loomer and Posobiec apparently took issue with the portrayal of Caesar, as the character bore striking similarities to President Donald Trump wearing a suit and red tie. Theaters have long used the play to reflect on contemporary politics. In 2012, another American production of the drama depicted the titular character as President Barack Obama.

The Public Theater’s latest production of the Shakespearean classic has prompted social media protests and led to the withdrawal of two corporate sponsors — Bank of America and Delta Airlines.

But defenders of the Public Theater’s Julius Caesar have argued that critics are missing the point. They say that it does not incite violence, contrary to Posobiec’s statement, but rather explores the consequences of using totalitarian methods to protect democracy.

Since premiering on May 23, the production had yet to be disrupted until Friday. The show ends its run on Sunday. 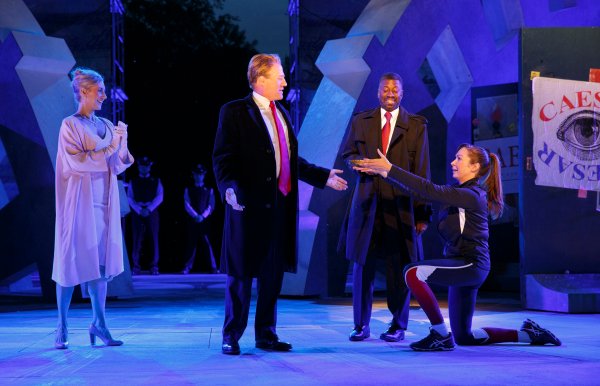 Why Donald Trump Was Low-Hanging Fruit for the Public Theater's Julius Caesar
Next Up: Editor's Pick