Before his death on Friday at the age of 87, Helmut Kohl, the former Chancellor of Germany, spent several years wondering whether he would outlive the Europe he had helped to build. And, in some ways, he did.

The idea of an “ever closer union” of European states was enshrined in the continent’s politics during Kohl’s tenure, which spanned such hopeful milestones in the history of Europe as the fall of the Berlin Wall, the end of the Cold War, the reunification of East and West Germany and the formation of a shared European currency, the euro.

All of these events were driven by Kohl’s determined brand of leadership, and by the time he stepped down in 1998 amid a financial scandal, the momentum behind European integration seemed virtually irreversible.

So it must have been painful for the ailing ex-Chancellor to watch from the sidelines as that momentum faltered. In trying to explain where things went wrong, he would often point to the global financial crisis that broke out in 2008, around the time when a bad fall and a head injury confined Kohl to a wheelchair for the rest of his life. In Kohl’s words, the European debt crisis that erupted the following year “crashed down on us with enough force to dislodge the essential European idea.”

It also threatened to dismantle Kohl’s crowning economic achievement – the euro – which he and his French ally, President Francois Mitterrand, forced into existence over the objections of many their peers and, indeed, many economists. As Kohl admitted in an interview in 2002, he had acted “like a dictator” in creating the euro, because he knew the German people would not support the project in a referendum. “I would have lost and by seven to three,” he said.

Nor did the former Chancellor hide the fact that his motivations were more political than economical: He wanted the euro to be a force for integration, binding together the disparate patchwork of European nations even if they were not ready to join a common market.

The euro crisis – and, in particular, the collapse of the Greek economy that started in 2010 – proved that Kohl’s idealism was in many ways misguided. Low interest rates shared by all 19 Eurozone nations allowed the smaller and poorer countries to borrow scads of money, which many shovelled into ballooning real-estate bubbles. After the crash, their banks and financial institutions went belly up. Germany, the region’s economic powerhouse, was forced to subsidize its partners in the euro with massive economic bailouts.

This caused substantial resentment among Germans. But their former Chancellor was unrepentant. In a book published in 2014 under the title Out of Concern for Europe, Kohl berated his countrymen for “historical amnesia, faint-heartedness, anxiety and complacency.” He goes on in the book to pose a stark question for all Europeans: “Have we forgotten that peace and freedom – the decisive lessons of history – are not a given? Put simply: have we all gone mad?”

From his home in Ludwigshafen, the city on the River Rhine where Kohl grew up during World War II under the Allied bombing raids and lived out the last years of his life in relative seclusion, Kohl’s impression that Europe had gone insane would only have intensified after his book was published. Soon after the European debt crisis came a succession of other threats and calamities: the war in Ukraine in 2014, the victory of far-left Euroskeptics in the Greek elections of 2015, and, most troubling of all for Europe’s integrationists, the British vote in 2016 to leave the E.U.

Taken together, these crises felt to many like the great unraveling for the European project, and if Kohl had died only a few months earlier, he would have had reason to fear on his deathbed that the E.U. would not survive much longer. The elections in France and the Netherlands this spring both threatened to bring anti-E.U. nationalists to power. A victory for the French leader of the National Front, Marine Le Pen, would likely have ruptured the partnership between Paris and Berlin that has held the E.U. together for decades.

But Europe has dodged that particular bullet. Both the Dutch and French elections went to steadfast supporters of E.U. integration. On June 15, the day before the former Chancellor died, a survey of ten European nations might also have brought him some welcome news. Public faith in the E.U. has rebounded in the year since the British vote to leave, according to the Pew Research Center. Even in the U.K. itself, a majority of those surveyed – 54% – said they favored the E.U.

Given his failing health in recent months, it’s not clear whether Kohl would have been well enough to appreciate Europe’s step back from the brink. Nor could he have been certain that the forces of Euroskepticism would not return and take power in the election cycles yet to come. The idea of an “ever closer union” has been put aside in Europe, as its leaders concentrate on preventing it from splitting further apart. But at least the institutions that define Kohl’s legacy have survived longer than he did.

That much was clear from the message that the newly elected President of France, Emmanuelle Macron, sent out on Friday in German: “With Helmut Kohl we have lost a great European.” To illustrate the point, Macron posted a photo of Kohl and Mitterand holding hands at a commemoration ceremony for the victims of World War II. Whatever the future of European politics, that message and its author surely help Kohl’s chances of resting in peace. 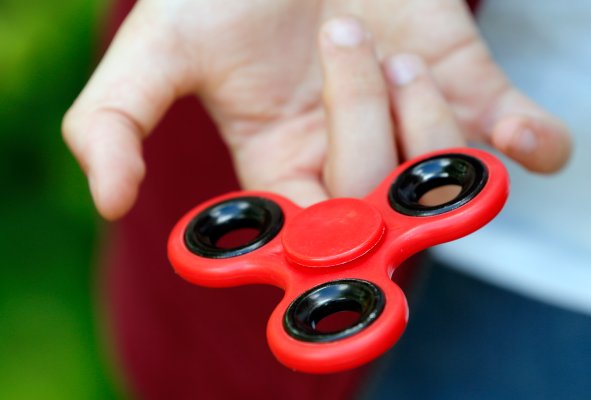 German Customs Officials Seized 35 Metric Tons of Fidget Spinners in May
Next Up: Editor's Pick