Russia’s defense ministry declared on Friday that it may have killed ISIS leader Abu Bakr al-Baghdadi in an airstrike on May 28, claiming credit for possibly assassinating the world’s most wanted terrorist.

If confirmed, Baghdadi’s death would be an important symbolic blow against the Islamic State, depriving a hierarchical organization of its top leader, the man who declared himself the leader of a caliphate and called on Muslims across the world to join him.

However, Baghdadi’s death has been reported several times in the past but never confirmed. As a result, there is a wealth of reasons to remain skeptical about Russia’s claim:

1. Not even the Russians are convinced.

The Russian defense ministry said that it was investigating whether Baghdadi had been killed. Commenting on the reports at a news conference on Friday, Foreign Minister Sergey Lavrov said, “So far, I have no one-hundred-percent confirmation of the information that Abu Bakr al-Baghdadi has been killed.”

According to the TASS news agency, Lavrov also threw water on the idea that killing Baghdadi would be a decisive blow against the group. “All examples of such actions to ‘decapitate’ terror groups had always been presented with great enthusiasm and pomp, but experience shows that later these groups restored their combat capabilities,” he reportedly said.

2. Past claims of Baghdadi’s death have been discredited.

Since 2014, the ISIS leader’s death has been reported several times, but never confirmed. In November 2016, ISIS released an audio recording of what it said was Baghdadi’s voice, apparently disproving prior reports of his death. ISIS has made no announcement of its leader’s death. When other key leaders have been killed, the group has declared them martyrs.

As recently as June 10, Syrian state television claimed that he had been in a government airstrike on the city of Raqqa, the Islamic State’s de facto capital. U.S. officials believe Baghdadi is deeply in hiding. Experts say he employs strict operational security, refusing to allow mobile phones around him to evade surveillance, even foregoing a personal security detail in order to avoid attracting attention.

3. Russia has made baseless claims about killing ISIS leaders in the past.

Russia has attempted to claim credit for past milestones in the struggle against ISIS, apparently seeking to inflate its role in fighting the group in a rivalry with the U.S.-led military coalition.

In August 2016, ISIS announced that its chief propagandist and strategist, Abu Mohammed al-Adnani, had died in Syria’s Aleppo province. The Pentagon said that it had targeted Adnani in an airstrike on the town of al-Bab, outside of Aleppo.

Within days, the Russian government claimed that its own airstrikes had killed Adnani. U.S. officials dismissed that claim. One American defense official called it “a joke.” Commenting on the dispute in November 2016, top U.S. envoy Brett McGurk said, “The Russians have tried to take credit for his death, because it was a very important one, I can guarantee you it was not the Russians, it was our Coalition.”

For years, Russia has deployed deception and false information about world events in order to shape perceptions to its strategic advantage. Observers of the Russian foreign policy say the use of falsehoods is systematic and deliberate, and extends from official statements to state-owned media, as well as social media. Disinformation tactics appear to have been used in the context of Russian operations in Georgia and Ukraine, and in the debate over possible Russian attempts to influence the U.S. Presidential election in 2016. A report by the RAND Corporation called this torrent of disinformation a “Firehose of Falsehood.”

North Korea Says It Has No Plans for U.S. Talks

Russia’s intervention in the war in Syria has been no exception. When it launched a campaign of airstrikes in 2016, Russia said the operation targeted ISIS, but the pattern of attacks told a different story. The strikes primarily struck areas held by rebel groups opposed to both ISIS and the regime of President Bashar Assad. The strikes took an enormous toll on civilians.

Another example of Russia’s misleading statements came in March 2016 when President Vladimir Putin announced he had ordered the withdrawal of the “main part” of its forces from Syria, saying the campaign there had achieved its objectives.

Russia resumed airstrikes later in 2016, unleashing a relentless bombardment on the rebel-held section of the city of Aleppo, forcing rebels there to surrender in December in one of the key turning points in more than five years of war. The resumption of the offensive made Putin’s prior announcement of a withdrawal look like yet another attempt to seize the initiative from rivals like the United States, Turkey, and others arrayed on the opposing side of the civil war. 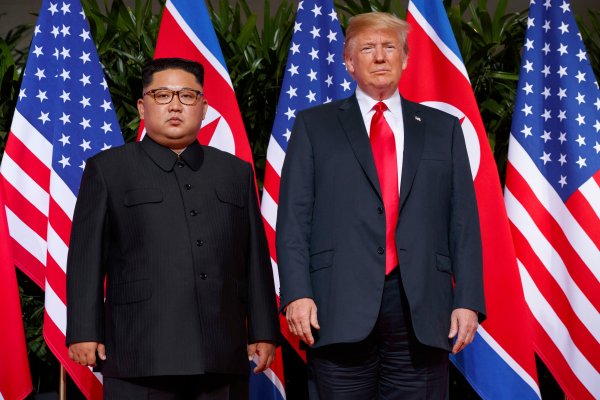 North Korea Says It Has No Plans for U.S. Talks
EDIT POST