The Congressional Baseball Game raised more than $1 million for charity as ticket sales spiked the day after a gunman opened fire at a practice session for the Republican team.

More than 20,000 tickets had been sold as of Thursday afternoon, ABC News reported, and the increased donations came from “the outpouring of support and generosity” from sponsors, Congressional Sports for Charity told the news outlet. The Washington Nationals baseball team has even opened up extra seating for the game, according to ABC.

The boost in ticket sales and sponsors following the Wednesday attack has doubled what the game brought in last year. It raised $500,000 in 2016, and was on track to raise $650,000 this year before the shooting, according to Roll Call.

Proceeds from the game, set to take place Thursday evening, will go to the Boys and Girls Club of Greater Washington, the Washington Literacy Center, the Washington Nationals Dream Foundation and the newly added Capitol Police Memorial Fund.

While Rep. Steve Scalise of Louisiana remained in critical condition following the shooting, lawmakers said they would go on with the game to honor the bipartisan tradition.

“We’re playing the game tomorrow,” Rep. Joe Barton, of Texas, the Republican team manager, said on Wednesday. “We’re united, not as Republicans and Democrats, but as United States representatives.”

The game has been taking place since 1909, and is seen as a way to unite those on Capitol Hill, particularly in a time of extreme polarization. Instead of wearing uniforms from their home teams, ABC News reported that lawmakers will show support for Scalise on Thursday night by wearing Louisiana State University baseball shirts to honor his home state. 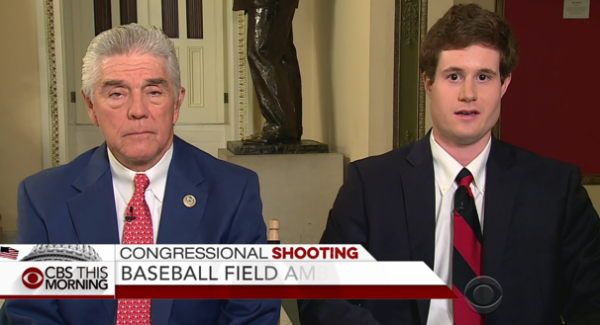 ‘My Single Focus Was to Stay Alive.’ How This Virginia Shooting Victim Survived
Next Up: Editor's Pick