Gwyneth Paltrow Discusses How Brutal It Was Being a Teen

Even Gwyneth Paltrow, queen of composure and wellness, had an awkward phase. At least, that’s what she admitted to NBC’s Matt Lauer during an interview for TODAY Thursday. After discussing her role as founder and CEO of her lifestyle empire GOOP, Lauer and Paltrow moved to reminiscing about her youth when talk turned to her daughter Apple, who’s now 13.

“I think being a 13-year-old girl sucks no matter what century. No matter what time frame, I think it’s just hard,” she told Lauer, alluding to her own “brutal” experience. “That was a really hard year for me,” she explained. “I was really trying to grow into this awkward, gawky body, which I think I half grew into. I had braces, and I thought it would be a great idea to shave the back of my head. I think it’s a time in one’s life when you’re trying on different personas, and you’re trying to figure out what kind of person you want to be. It’s painful.”

But when Lauer asked how it was going with Apple, Paltrow had mostly good things to say. “So far, Apple — she’s pretty great,” she admitted. “I mean, sometimes she asks me to close her door. She’s like, ‘Can you close my door?’ And I’m like, ‘Wait, with me on the other side of the door?'” Yes, even Gwyneth gets shut out sometimes — but that’s to be expected as kids grow up. 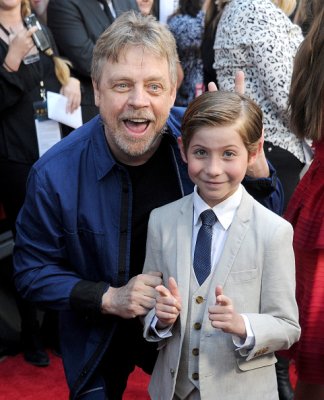 Mark Hamill Hung Out With Star Wars Superfan Jacob Tremblay and It Was Adorable
Next Up: Editor's Pick