The first part of Cars 3 is a little like All About Eve, but with cars. In the middle, it’s more like Sunset Boulevard, but with cars. By the end, you may detect a few aromatic base notes of The Karate Kid, but with cars. Still, what’s most notable about the third entry in Pixar’s Cars franchise–the first was released in 2006, and there are legions of kids, many now practically in college, who have probably watched it 2,006 times each–is that a female car features prominently in the story.

Cruz Ramirez (Cristela Alonzo) is a sporty little millennial number who has always dreamed of being a race car, though she’s had to settle for being a trainer. As a woman, she found pushing her way into an almost all-male field impossible. Lightning McQueen (Owen Wilson) is the veteran–in other words, aging–racer in danger of being pushed out of his profession by younger, faster cars. He resents Cruz, until he realizes that helping her might be the best way to help himself.

If, as an adult, you go to the movies to escape your workplace anxieties, Cars 3 may not be your best bet. Then again, while all Pixar movies are fine-tuned to keep adults as well as kids engaged, it’s still fascinating to see workaday grownup fears addressed so openly. Plus, the modest pleasures of Cars 3, directed by Brian Fee and featuring an agile but unobtrusive score by Randy Newman, are hardly negligible. I, for one, am always happy to see the recurring character Luigi, the vintage Fiat voiced by Tony Shalhoub. His comically exaggerated “That’s-a spicy mittball” accent is practically an art form unto itself. None of this answers the question of how your kids will feel about Cars 3, but you don’t even have to ask that one: they’ll probably end up watching it 2,006 times. 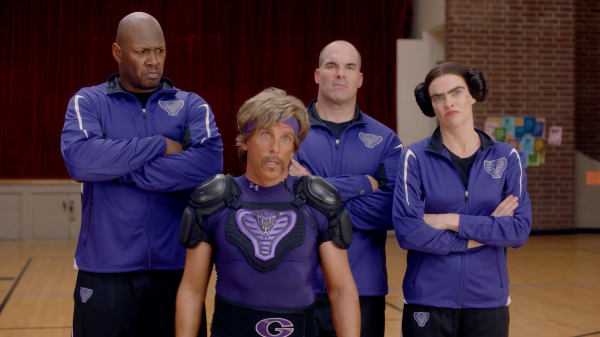 Ben Stiller and Vince Vaughn Reunite In 'Dodgeball' Video
Next Up: Editor's Pick