The Real Reason Why Bachelorette Parties Are a Thing

Columbia Pictures
By Olivia B. Waxman

When movie Rough Night opens in theaters Friday, the comedy about college friends who reunite 10 years later at a bachelorette party that goes wrong will be just one of a recent string of entertainments to celebrate that pre-bridal event. But, while bachelor parties tend to get traced back to the Spartan ritual of toasting to a fellow soldier the night before his wedding day, the female version didn’t take hold until the mid-20th century.

Beth Montemurro, a sociologist who wrote Something Old, Something Bold: Bridal Showers and Bachelorette Parties, says the only all-female party for brides-to-be was a bridal shower until the 1950s and 1960s when some women held a second shower where they could both drink with their girlfriends and open presents that they wouldn’t want to open in front of their families and family friends, such as lingerie. (At the time, unmarried women were “bachelor girls,” not “bachelorettes,” but the term generally referred to those who had no intention of marrying any time soon.)

But the parties didn’t become household names until the 1980s. The first mention of a bachelorette party in TIME magazine appeared in an Aug. 6, 1979, feature in that spotlighted the male strippers who performed at a clubs like the Sugar Shack in Lake Geneva, Wisc.:

Montemurro says the women’s liberation movement and the sexual revolution led more women to wonder why men got to have fun bachelor parties, while women got “boring showers,” so bachelorette parties were just another way women at the time where showing men that they can do whatever men could do.

And how did those raunchy nights out become elaborate weekends away for which bridesmaids now shell out hundreds of dollars? For that, Montemurro says that American women can blame one particular wedding: after some 750 million people watched Princess Diana marry Prince Charles on July 29, 1981, in what the press hailed as a “the wedding of the century,” weddings became noticeably bigger affairs. The attendant parties quickly followed suit. As the booming economy of the 1990s helped bolster a lucrative wedding industry, and the rise of the Internet and social media encouraged the sharing of information about wedding planning, such parties became considered a necessary ritual by many.

“There’s this idea of wanting to emulate what wealthier people and celebrities are doing,” Montemurro says, “and as weddings become more extravagant, so do the rituals surrounding them, like bachelorette parties.” 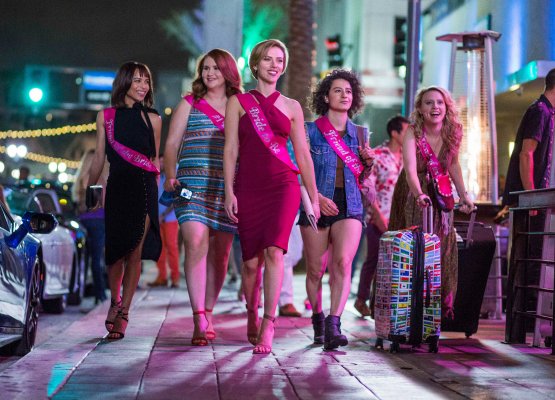 Review: Rough Night Exposes the Threadbare Downside of the Women-Cutting-Loose Genre
Next Up: Editor's Pick