Buying Your Dad a Gift Is Why Father's Day Exists

Don’t feel bad if you’re getting your dad yet another necktie for Father’s Day this year. In fact, buying a tie is a big part of the reason Americans celebrate the holiday in the first place.

When President Richard Nixon made Father’s Day into an official holiday via presidential proclamation in 1972, he didn’t do it in order to sell dad-friendly gifts. But the Father’s Day we know today wouldn’t have been possible without the men’s clothing industry.

It all started around the turn of the 20th century, when a variety of boosters started pushing for the idea of a national day to celebrate fathers. These early Father’s Day advocates included everyone from loving daughters to famed social reformers — and all of them owed much for the idea to another holiday, Mother’s Day.

In 1908, the first Mother’s Day was celebrated as the outgrowth of a decades-long attempt to get the holiday going by Anna Reeves Jarvis, a West Virginia woman who originally conceived of the holiday. A year later, Sonora Smart Dodd, a Spokane woman who had been raised by a single father, attended a church service in honor of the new holiday and began to petition for a version for fathers. She suggested that a holiday be founded around the time of her father’s June birthday. But her idea received little support at first.

And Dodd wasn’t alone. Famed settlement house founder and social reformer Jane Addams tried to get a Father’s Day holiday going in Chicago, too. So did Harry C. Meek, a Lions Club member who tried to persuade presidents to go along with it. But despite their efforts, it just wouldn’t gel.

“It has been suggested that it was father’s natural modesty which caused the plan to fail,” wrote the New York Times in 1926. Or maybe it was Americans’ unwillingness to put parents on a pedestal. “What greater wrong could we do as members of this great family of America than be the prime movers in the establishment of a separate day of worship of each parent?” asked a reader of a Christian newspaper in a 1911 letter to the editor.

But maybe there was another reason: the holiday’s unabashed alignment with the clothing industry from almost the start. The prospect of a holiday for fathers aroused the interest of clothing manufacturers, who began making plans for special sales.

In 1925 that backfired when different industries declared Father’s Day on different days. “Certain women’s clubs, aided by trade organizations interested in neckties, set out to honor [Father] on June 21,” The New York Times explained. “But other organizations, interested in tobacco, jumped in and set the great day for June 14.” A truce — and a June 21 date — was declared, but not before the mix-up and the holiday were roundly mocked.

Nevertheless, Father’s Day maintained its retail roots. In 1938, the National Dry Goods Retail Organization announced plans to “make Father’s Day as important an event” as Mother’s Day with a drive that included the producers of everything from robes to handkerchiefs to sporting goods.

The next year, retailers of all stripes joined together in the National Council for the Promotion of Father’s Day, a kind of supergroup aimed at making the holiday more popular. It brought in civic leaders to make the holiday lucrative without making its industry ties too overt. “The key to the success of Father’s Day was to make the commercialization of honor appear noncommercial,” writes sociologist Ralph LaRossa in his 1997 book The Modernization of Fatherhood: A Social and Political History.

It would take another 33 years for the holiday — helped along by the tireless efforts of the council that wanted to create a mid-year retail extravaganza — to gain enough momentum to be nationally recognized.

The Father’s Day Council still exists and has since joined forces with its Mother’s Day-related counterpart. Every year, it gives out Father of the Year awards and raises funds for family-related charities. Meanwhile, Father’s Day has become more and more important to retailers each year. This year, the National Retail Federation estimates that Americans will spend $15.5 billion dollars on Father’s Day — the most ever.

Of course, none of this is what Sonora Smart Dodd, who originally called for a Father’s Day, anticipated. Dodd, who distributed roses to dads throughout Spokane on the earliest Father’s Day, just wanted her dad to have a “place in the sun,” she told The New York Times. But that place usually contains a gift for Dad — thanks to the savvy retailers who turned her dream from fantasy into very lucrative reality. 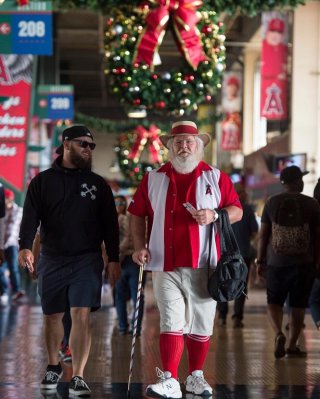 Meet the Real Bearded Santas Trying to Keep Christmas Alive All Year
Next Up: Editor's Pick