What to Know About Suspected Virginia Shooter James Hodgkinson

A top Republican congressional leader and four other people were injured Wednesday when a gunman fired bullets at a baseball field in Virginia where GOP members of Congress and their staffs were practicing for their annual charity baseball game. The shooter was taken into custody after exchanging fire with law enforcement and later died in a hospital from his injuries, the FBI said.

The FBI and Capitol Police identified the shooter as James Hodgkinson, of Illinois.

Here’s everything you need to know about Hodgkinson:

Who is shooter James Hodgkinson?

Hodgkinson was a 66-year-old was a business owner of Belleville, Ill. who had had at least one previous run in with the law, the Washington Post reported, citing law enforcement officials.

Hodgkinson was upset that Trump won last year’s presidential election, his brother told the New York Times. Hodgkinson had gone to Washington, D.C. in recent weeks to join in on protests against the President. “I know he wasn’t happy with the way things were going, the election results and stuff,” brother Michael Hodgkinson said, adding that the two did not have a close relationship.

Illinois Rep. Mike Bost, a Republican who represents the district that includes Belleville, said in a post on Facebook that Hodgkinson contacted his office 10 times beginning in June 2016 through May 2017 and “continually expressed his opposition to the Republican agenda in Congress.” However, “the correspondence never appeared threatening or raised concerns that anger would turn to physical action,” Bost said.

In a briefing late Wednesday, Tim Slater, the FBI special agent in charge of the Washington, D.C. field office, said law enforcement believes Hodgkinson has been living out of his white cargo van in Alexandria, Va., since March.

Bill Euille, the former Democratic mayor of Alexandria, Va., told the Post Hodgkinson lived out of his gym bag for the past month and a half and would see him daily at the local YMCA. Euille said he spoke to the suspected shooter almost every morning when he’d see Hodgkinson on his laptop in the gym’s lobby “for hours and hours.”

“He was a very friendly person. But what I did notice about this gentleman is he’d open up his gum back and in it, he had everything he owned,” Euille told the Post. “He was living out of the gym bag.”

“Outside of myself, I don’t think he knew anyone else in town,” he said.

Hodgkinson had worked on Sen. Bernie Sanders’s presidential campaign in Iowa, according to the Post, which cited another campaign volunteer who knew Hodgkinson. The acquaintance from the campaign trail, Charles Orear, told the newspaper he thought Hodgkinson was a “quiet guy” who was “very mellow, very reserved.”

The Belleville News-Democrat reported local police had told Hodgkinson to stop shooting a shotgun at trees near his home in March when neighbors complained after hearing about 50 shots fired. Hodgkinson had a valid Firearms Owner’s ID, the News-Democrat reported. In April 2006, suspected shooter also had two battery charges and a charge for aiding damage to a vehicle, which were was later dismissed, the newspaper reported.

In a 2011 interview with Fox 2 News in St. Louis, Hodgkinson voiced his support for the Occupy Wall Street movement. “The 99% are getting pushed around, and the 1% are just not giving a damn,” he said at the time. “So, we’ve got to speak up for the whole country.”

A motive is still unclear, and the FBI is investigating the incident. Slater, of the FBI, said it’s too soon to say whether the GOP lawmakers were targeted in a deliberate attack. “We’re exploring all angles,” Slater said.

The FBI is investigating if Hodgkinson had any associates, his whereabouts before the shooting, his social media presence and potential motivations. Slater did not comment when asked if Hodgkinson had a “vendetta” against Republicans during a press briefing Wednesday. He also said there is no other person in custody.

In the last seven years, Hodgkinson has written several letters to his local newspaper, the Belleville News-Democrat. He often slammed the Republican Party and has stated that he supports President Barack Obama. “Let’s vote all Republicans out of Congress, and get this country back on track,” he wrote in 2012.

The Republican baseball team practices every morning at 6:30 a.m. at Eugene Simpson Stadium Park in Alexandria, Va., according to Rep. Roger Williams, who coaches the GOP baseball team. The legislators were warming up for practice about 7 a.m. when gunfire erupted on the field, he said. 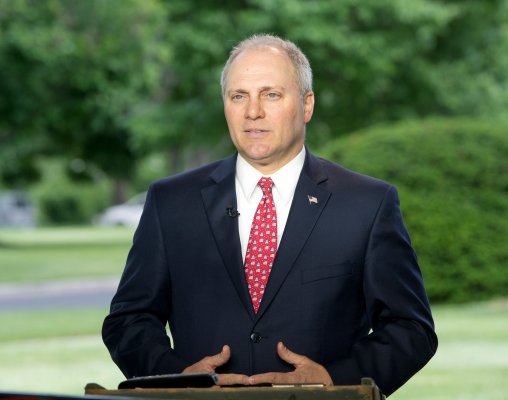 Steve Scalise Was Shot at a Congressional Baseball Practice. Here's What You Need to Know
Next Up: Editor's Pick