What to Know About the Deadly Fire at London's Grenfell Tower

More than 200 firefighters have been battling an “unprecedented” blaze at a 120-apartment tower block in Notting Hill, West London, which killed at least 30 people.

Here’s what you need to know about the emergency, which was declared a “major incident” by London’s mayor, Sadiq Khan.

A fire erupted at the 24-story Grenfell Tower on Latimer Road in West London — thought to be home to around 600 people — just before 1 a.m. local time on Wednesday morning. The first emergency responders arrived within six minutes of receiving a call about the incident.

Witnesses said they saw trapped residents using their cells phones and flashlights to signal for help, as well as jumping from the upper floors of the block.

The U.K.’s Press Association said a baby was caught by a member of the public after it was dropped out of a window on the ninth or tenth floor. “A woman was gesturing that she was about to throw her baby and if somebody could catch her baby,” Samira Lamrani said. “Somebody did, a gentleman ran forward and managed to grab the baby.”

More than 100 police officers have been on the scene, as well as around 100 medics and 250 firefighters. The Metropolitan Police closed the major A40 road in both directions to allow the emergency services access to the incident.

By mid-afternoon, firefighters were carrying out systematic searches throughout the charred wreckage and they are predicted to remain there this evening. By 5 p.m. local time, they had managed to reach the top floor of the building.

A police cordon set up around the block was pushed back Wednesday morning amid concerns that the whole building, which was built in 1974, could collapse.

Actor and writer Tim Downie, who lives near the scene, told London’s Evening Standard paper that it was the “most terrifying thing” he had ever seen. “I just hope they have got everyone out,” he added.

Have there been any fatalities?

At least 30 people, including one person who was taken to hospital, have been confirmed dead by the Metropolitan Police. “This figure is likely to rise during what will be a complex recovery operation over a number of days,” Commander Stuart Cundy said.

Police said that some victims of the blaze might never be identified. There was “a risk that sadly we may not be able to identify everybody,” Cundy told reporters, according to the BBC.

The first identified victim of the blaze was named as 23-year-old Mahammed Alhajali, a Syrian refugee who arrived in the U.K. in 2014. The BBC reports that he was a civil engineering student, according to the charity group Syria Solidarity Campaign.

At least six victims have been provisionally identified, reports the BBC.

Have there been any injuries?

The emergency services said 69 people were injured in the blaze and were taken to six hospitals across London. A total of 37 people are still being treated in hospitals including St Mary’s and King’s College, and 17 remain in critical care.

Yes. People are still searching for relatives and friends more than 24 hours after the blaze began. Those missing include a 24-year-old photographer called Khadija Saye, an Italian couple called Gloria Trevisan and Marco Gottardi, and Rania Ibrham, a 30-year-old mother of two young children.

Worried friends and family are turning to social media to help them find their loved ones.

An emergency number has been set up for anyone concerned for loved ones caught up in the fire. Those who are worried are advised to call the Metropolitan Police’s Casualty Bureau.

The fire’s cause has not yet been identified, but residents told the Guardian that the blaze looked like it started in an apartment on a lower floor and then quickly spread upwards. It is thought to have engulfed the block from the second floor and above within seconds. After the fire broke out, a plume of smoke stretched for miles.

The building was recently restored by developer Rydon, and records suggest they used aluminum composite material (ACM) in the cladding, or exterior, of the tower. The product has been “blamed for fueling nearly a dozen major high-rise fires globally in the past decade,” according to the Sydney Morning Herald.

Tweets by architects gathered by the U.K.-based Architects Journal said the spread of the blaze suggested the cladding played a role.

Rydon director Andrew Goldman said it was too early to speculate. “We don’t know there is any direct link between the fire and cladding,” he said on British television.

Joe Ruane, the former deputy chief fire officer for U.S. Air Force bases in Britain, told the Associated Press that he has never seen a fire in an apartment block spread at such speed. “It’s not just one thing. It’s multiple issues,” he said, adding that it was likely that several fire protection safeguards at Grenfell Tower failed.

Had there been safety warnings about the tower block?

Yes, many. Local activists the Grenfell Action Group had written numerous times about its concerns for the tower block’s safety, regularly calling for it to be torn down.

“Regular readers of this blog will know that we have posted numerous warnings in recent years about the very poor fire safety standards at Grenfell Tower and elsewhere in the Royal Borough of Kensington and Chelsea (RBKC),” a statement posted Wednesday on the group’s website reads. “All our warnings fell on deaf ears and we predicted that a catastrophe like this was inevitable and just a matter of time.”

In a post published in November 2016, the group wrote that “only a catastrophic event” would “expose the ineptitude and incompetence” of the block’s landlord and “bring an end to the dangerous living conditions and neglect of health and safety legislation that they inflict upon their tenants and leaseholders.”

“Unfortunately, the Grenfell Action Group have reached the conclusion that only an incident that results in serious loss of life of … residents will allow the external scrutiny to occur that will shine a light on the practices that characterise the malign governance of this non-functioning organisation,” the post continued.

Were there fire alarms?

Not according to residents. One man, who escaped from the seventeenth floor with his aunt, said he heard no fire alarms going off. “There were no fire alarms anywhere because we don’t have an integrated fire alarm system, it’s just every house for itself,” he told Channel 4 News. “I had to pull myself out to look down the window and I saw the fire blazing and coming up really fast because of the cladding, the cladding was flammable, and it just caught up like a matchstick.”

How has the local community responded?

As always in such tragic times, the local community is rallying around those affected by the fire. Jon Pewtner, Senior Emergency Response Officer for the British Red Cross told the Guardian that locals were collecting food, drink and clothes and asking others whether they needed help. “There is a good, strong community spirit,” he said.

Other institutions have been offering shelter to residents, including Latymer Upper School, St Clement’s church and the Al Manar mosque in Ladbroke Grove

British celebrity chef Jamie Oliver has offered fire victims free food and shelter at his restaurant in the Westfield shopping center. In an Instagram post, Oliver wrote: “You are all welcome to come hang out in my restaurant and be fed and watered by my Jamie’s Italian team. We are in the Westfield just around the corner.”

A number of individuals, including London Mayor Sadiq Khan, have condemned the “bad advice” given to residents that advised them to “stay put” if a fire occurred unless told otherwise. A 2014 newsletter to residents said the block had been designed according to “rigorous fire safety standards” so “unless there is a fire in your flat or in the hallway outside your flat… you should stay inside your flat,” the Guardian reports.

Speaking about the newsletter on BBC Radio 4’s Today program Wednesday morning, Khan said: “Thankfully residents didn’t take that advice but fled… these are some of the questions that have to be answered.”

What else has London’s mayor said?

As well as condemning the advice given to residents to “stay put,” Khan described the incident as “very distressing” on BBC Radio 4’s Today program. “It’s very distressing, not just for those of us watching as lay people, but also very distressing for the emergency services,” he said.

Khan, who was recently accused by President Trump of being “pathetic” in his response to the London Bridge terrorist attack, added: “We declared a major incident very early, which meant not just the fire service but also the London ambulance service, the police and the others were involved at the scene.”

How has the British government responded?

Prime Minister Theresa May said on Twitter she was “deeply saddened by the tragic loss of life” at Grenfell Tower, later promising a full investigation into the incident. “In due course when the scene is secure, when it is possible to identify the cause of this fire, there will be proper investigation and if there are any lessons to be learned, they will be and action will be taken,” May said in a televised address, Reuters reports.

The announcement of a deal between May’s Conservative Party and the DUP, which was due to take place Wednesday, has been postponed until next week because of the fire. The leader of the opposition Jeremy Corbyn said he was “devastated” by the incident. 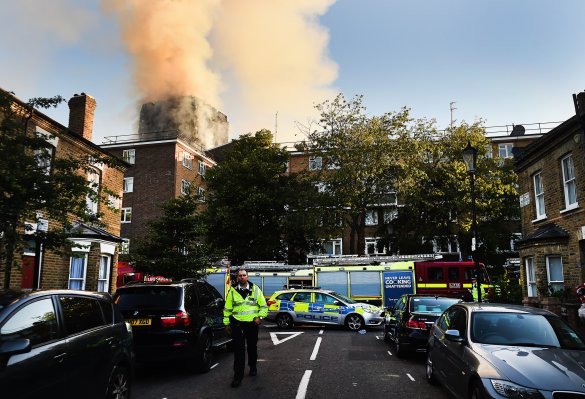 Scenes From the West London High-Rise Fire
Next Up: Editor's Pick