Tina Benko, left, portrays Melania Trump in the role of Caesar's wife, Calpurnia, and Gregg Henry, center left, portrays President Donald Trump in the role of Julius Caesar during a dress rehearsal of The Public Theater's Free Shakespeare in the Park production of Julius Caesar, in New York. Rounding out the cast on stage is Teagle F. Bougere as Casca, and Elizabeth Marvel, right, as Marc Anthony.
Joan Marcus—The Public Theater/AP
Ideas
By David Von Drehle

The election returns were still coming in when Oskar Eustis, artistic director of New York City’s famed Public Theater, knew what he must do.

Seven months later, the deed is done: the first play of the season at Shakespeare in the Park features the assassination of a Donald Trump look-alike by a gender-neutral cast of conspirators in the latest adaptation of Julius Caesar.

The quick turn­around shows that this was low-hanging fruit. If your job is to bring Elizabethan drama to masses of 21st century New Yorkers, a little scandal and titillation is your friend. With Trump in power, dressing a blond actor in a long red necktie and calling him Caesar is, for an impresario, as obvious as Wonder Woman 2.

Equally predictable were the stagey howls of protest from supposedly outraged right-wing media, who reckoned the play made a a case for assassination, while most Shakespeare scholars say quite the opposite. Together, the transgressive artists and the defenders of decency collected enough headlines to hold them until the next round of their dreary symbiosis, which is as stale as Popeye vs. Bluto.

Never dreary, never stale, is Shakespeare himself. As long as there is lust and longing, ambition and indecision, fear and courage, callowness and madness, jealousy and benevolence, frippery and intrigue, grief and misperception, guile and error and love, the Bard will be up to date.

This is why his work is so easily moved through space and time. Romeo and Juliet take new shape as Tony and Maria in West Side Story. The Taming of the Shrew becomes a John Wayne western. Twelfth Night meets Channing Tatum’s abs at a posh high school. Caesar has been plopped by various directors into fascist Europe, contemporary Africa and a simulacrum of the Obama Administration.

John Keats spoke of Shakespeare’s “negative capability”—his gift for feeling another’s feelings and seeing through another’s eyes without imposing his own personality. No quality could be more useful today, when so much of our culture urges us to exaggerate differences. Look through our own eyes only and it’s easy to divide the world into friends and foes, to deny the flaws of allies while magnifying the blemishes of the enemy.

Not that Shakespeare ignored the gory fact of faction. “Stoop, Romans, stoop/ And let us bathe our hands in Caesar’s blood/ Up to the elbows, and besmear our swords,” Brutus cries after the assassination. But the same poet also gives voice to Caesar’s avenging followers, and to the mixed-up mob of ordinary Romans pushed and pulled between the rival camps.

Shakespeare’s nuanced world is peopled by complicated individuals who grow and change. Macbeth’s hunger for power winks out like a “brief candle” upon news of his wife’s death. Prince Hal’s fear of duty plays out in an endless adolescence—until duty calls, and he grows into fearless King Henry V. Falstaff is broad and bawdy right up to the moment of death, which finds him tenderly whispering the 23rd Psalm. Shakespeare gives us the ardor and error of teen love, and the nakedness of an old man’s broken dreams, the emptiness of power and the hollowness of revenge. He is the epitome of that vanishing virtue, the genuinely open and seeking mind.

Which brings us back to the Delacorte Theater in Central Park. Though he wrote Julius Caesar as a tragedy, Shakespeare might have done the current controversy as borderline farce. He would see the pedantry behind plopping a faux-Trump into a golden bathtub with his wife Calpurnia cooing in Melania’s heavy accent. He would revel in the hypocrisy of Trump’s shocked, shocked defenders. He would squeeze laughs from the flustered tail covering of Delta Airlines and Bank of America as the Public Theater patrons scrambled away from the tempest.

But underlying all of these characters would be his conviction that they are more alike than different, and we, too, share their human nature. “All the world’s a stage,” he wrote. “And all the men and women merely players/ They have their exits and their entrances/ And one man in his time plays many parts.”

In our blinkered era, Shakespeare asks us to fling open the doors of our own minds—a true act of resistance to the wall-building spirit of us against them. 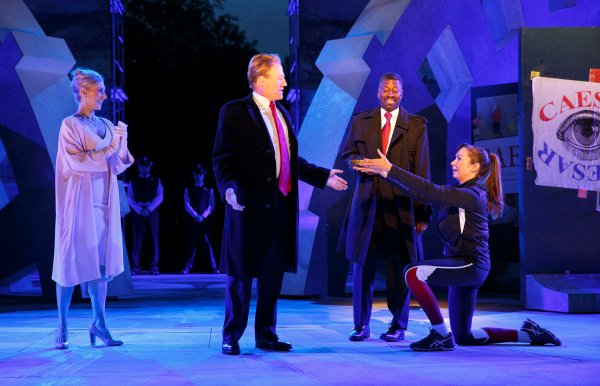 Sponsors Turn Their Back on Trump-Themed 'Julius Caesar' Play
Next Up: Editor's Pick