Tina Benko, left, portrays Melania Trump in the role of Caesar's wife, Calpurnia, and Gregg Henry, center left, portrays President Donald Trump in the role of Julius Caesar during a dress rehearsal of The Public Theater's Free Shakespeare in the Park production of Julius Caesar in New York City, on May 21, 2017.
Joan Marcus—The Public Theater/AP
By Emma Talkoff

The dramas of English kings from centuries ago would seem to have little in common with the daily political grind in Washington.

But year after year, said D.C.’s Shakespeare Theatre Company Director Michael Kahn, audiences and commentators consistently draw parallels between the tribulations of power-hungry, corrupt and angst-tortured heroes of Shakespeare’s works and the theatrics of American democracy.

“Every time we do a ‘Richard III,’ it always appears we’re doing it because of a particular politician,” said Kahn. He has a letter on his desk right now from a fan who insists that the company’s recent production of “Macbeth,” which was set in Africa, was meant to criticize Trump. “There was no reference to any political situation, and yet someone saw it,” he said.

Shakespeare was again thrust into national politics over the weekend, as a New York production of “Julius Caesar” made waves—and lost sponsors including Bank of America and Delta Airlines—over depiction of a distinctly Trumpian Caesar. (Defenders noted that the company’s 2012 “Julius Caesar” included an Obama-like Caesar.)

During the election, thinkpieces and one-liners on the bard abounded, with pundits observing that Shakespeare explained the election and ruminating on what he might say about it today. Trump was likened to everyone from Richard III to King Lear, Vice President Joe Biden was termed a political Hamlet, and Hillary Clinton inspired comparisons to Lady Macbeth.

And it was hardly new, Kahn noted. George W. Bush drew parallels to Henry V, while Richard Nixon has long been termed a Shakespearean character.

In D.C. itself, the tendency to draw Shakespeare into politics—and politics out of Shakespeare—seems to be magnified. The Shakespeare Theatre Company offers Will on the Hill, in which lawmakers dress in Elizabethan garb and poke fun at politics, and a mock trial series in which Supreme Court justices preside over cases derived from the bard’s plays and other works of classic literature.

Aaron Posner, a playwright and director who has helmed a number of productions at D.C.’s Folger Shakespeare Library, said it isn’t hard to understand the temptation at play there: “We recognize in scenes in ‘Julius Caesar’ conversations that you know are happening in back rooms at this moment,” he said. “That’s compelling and provocative.”

The New York production fits into a long history of using Shakespeare’s plays to obliquely—or sometimes not so obliquely—comment on current political drama, says Stephen Greenblatt, a Shakespeare scholar at Harvard who penned an October thinkpiece called “Shakespeare Explains the 2016 Election.”

“The plays are screens on which you can project lots of different things,” he said. “They’ve been embraced by both the right and the left—they’ve been claimed by everyone.”

Kahn said it can be dangerous to try to make a current political figure fit too neatly within the archetypes laid out in a Shakespeare play; real-life politicians rarely fit neatly into literary tropes. And for Posner, today’s political characters are typically not interesting enough to warrant comparison to the “eloquence and complexity” of Shakespeare’s characters.

But reinterpreting Shakespeare’s works to fit the current political scene might also ring true, argued Posner. Much like current day literary-minded pundits, Shakespeare himself appropriated familiar history and parables of power to interpret the political dramas of his own time.

“He set his plays in Italy and Croatia, he set them all over the world, but they were all Elizabethan England,” Posner said. “And everyone knew what he was talking about.” Shakespeare’s plays were originally meant to bring a dramatic historical lens to contemporary politics, Greenblatt and Posner argue—in other words, exactly how they’re being used today.

This can give the plays a sense of being almost “weirdly contemporary,” said Greenblatt, who says he’s collecting other examples of Shakespearian parallels in the contemporary political realm for an upcoming book.

“The plays have always been used that way, always been alive like that,” he said. “It’s both interesting and often cathartic to think about the contemporary through a historical lens.”

Regardless of their verity, allusions to Shakespeare in the political realm and politics in Shakespearian productions seem unlikely to abate any time soon. And for Kahn, at least, that’s exciting. “Those characters come alive in a way where their issues, and certainly their political power, and their private issues seem relevant,” he said. “I find that extremely exciting, that these plays can actually make people feel.” 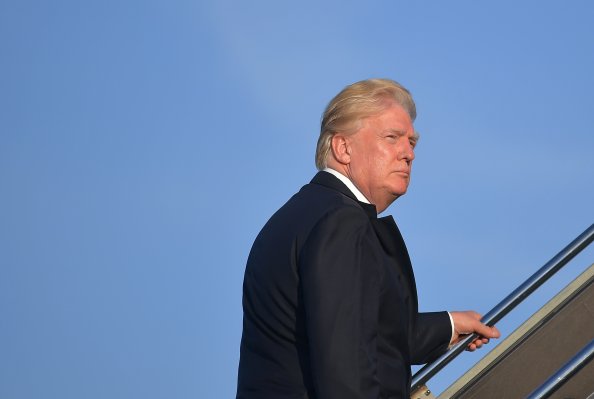