I Survived World War II. Nationalism Is a Path to War

Air raid practice in Berlin during World War Two, the damages from previous allied air raids can be seen all around, Germany, circa 1939–1945.
FPG—Getty Images
Ideas
By Karl M. von der Heyden
Karl M. von der Heyden served as the Chief Financial Officer of H.J. Heinz, PepsiCo and RJR Nabisco, where he was also CEO; his book, Surviving Berlin, will be published on June 20.

I am one of a dwindling number of people who remember sitting in air-raid shelters as a child in Berlin during World War II, as bombs rained down on us.

Berlin was not alone in suffering the ravages of World War II. Millions of Asians and Europeans saw their beautiful, historic cities and their fellow citizens destroyed by what seemed like a series of fratricidal wars.

Those experiences gave my generation a perspective that has been undermined with the passage of time. There was a determination in the post-war years that the many catastrophes of the 20th Century should never happen again. Japan vowed to eschew nuclear weapons after nuclear bombs obliterated Hiroshima and Nagasaki. Its military swore it would only be used for self-defense — as did the West German military. That commitment continued after German reunification in 1990.

Nationalism and populism were in retreat. The United States launched the Marshall Plan and spent heavily to rebuild the economies of Europe, including the economies of vanquished enemies. Europeans found a way to come together, assuring more than 70 years of peace. It started with the formation of the European Steel and Coal Community, with France, Italy, the Benelux countries and West Germany participating. This led to the Treaty of Rome in 1957, establishing the European Economic Community, which ultimately became the European Union. Europeans could now freely travel and move within Europe, almost the way Americans travel between states. Thirty years ago, President Reagan spoke these famous words at the Brandenburg Gate in Berlin: “Mr. Gorbachev, tear down this wall!” And it was.

But nothing can be taken for granted. The leadership my generation provided has faded, and each new generation of Europeans and Americans is one step further removed from the realities and consequences of terrible wars.

This collective tendency to forget is not a new phenomenon. After the horrors of the Napoleonic Wars, Europe was given a new order of nation states under the Treaty of Vienna, signed in 1815. The new order lasted relatively well, surviving the revolutions of 1848 and the subsequent Crimean and Franco-Prussian wars. By the time World War I began in 1914, institutional and personal memories of the post-Napoleonic order had been weakened or forgotten.

Similarly, seventy years after World War II, millions of people in the U.S. and Europe have forgotten the lessons learned from that war and from the peace that followed. Nascent nationalist and popular movements converged in Britain to produce a vote to leave the European Union. Similar coalitions heavily influence the American political scene today, as they do in Poland, Hungary and even the Netherlands. White House communications that appear to realign foreign policy put in place over the last half-century are beginning to concern America’s allies.

I understand why the “America First” movement propagated by Donald Trump sounds patriotic to many voters, as do other movements that favor isolationism. It is natural to blame others for our failure to adjust to new technologies, to immigration and to competition from countries whose growth rates are higher than our own. But the truth is that the “America First” movement runs the risk that it could trigger a global decline in productivity. Free trade has benefitted the U.S, Europe and much of the rest of the world. Many new businesses, particularly in information technology, can now start with a global footprint on Day One instead of being confined to a local market. NATO has preserved the freedom of the Western World from Communism. It has recently become more relevant again in view of the Russia’s efforts to disrupt it.

Perhaps most worrisome is the apparent cooling of relations between European NATO allies and the United States, which has compelled German Chancellor Angela Merkel to say, “The times when we could fully rely on others are to some extent over… We Europeans must really take our fate into our own hands.”

Problems arise when we start classifying our own and other countries as “winners” or “losers.” Free trade, immigration and the treatment of refugees will never be perfect — far from it. But the alternatives of walling off people, as well as trade, are worse. Appealing to ultra-nationalist and xenophobic feelings is playing with fire. With easy access to weapons of mass destruction, the danger is greater than ever.

Growing up in Germany, I saw the dangers of fascism and nationalism. I saw leaders who only made matters worse by appealing to the majority of voters who feared minorities and foreigners.

Anyone who appreciates history would know better than to make even casual references to the possibility of nuclear war.

I came to America as an immigrant and was able to have a successful career. My life testifies to how well the postwar order has worked, making my dream and the dreams of my generation a reality. Today’s world cannot afford to forget the lessons learned.

Karl M. von der Heyden served as the Chief Financial Officer of H.J. Heinz, PepsiCo and RJR Nabisco, where he was also CEO. He also served as an independent director on a dozen large publicly held companies, including the New York Stock Exchange, DreamWorks Animations, AstraZeneca and Macy’s. His book, Surviving Berlin, will be published on June 20. 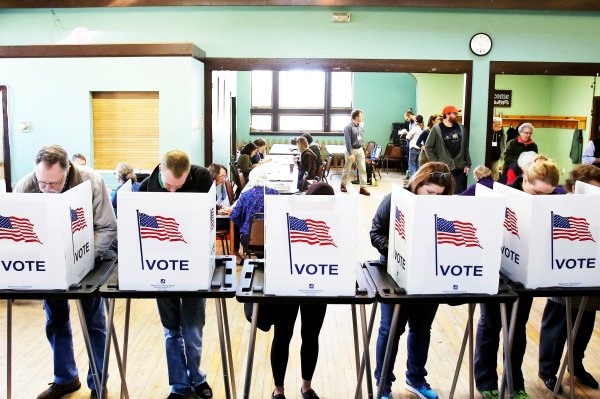 What Trump's Rust Belt Supporters Need to Know This Week
Next Up: Editor's Pick