Sponsors Turn Their Back on Trump-Themed 'Julius Caesar' Play

Tina Benko, left, portrays Melania Trump in the role of Caesar's wife, Calpurnia, and Gregg Henry, center left, portrays President Donald Trump in the role of Julius Caesar during a dress rehearsal of The Public Theater's Free Shakespeare in the Park production of Julius Caesar in New York City, on May 21, 2017.
Joan Marcus—The Public Theater/AP
By Jennifer Calfas

Delta Airlines and Bank of America, two big corporate donors to New York’s Public Theater, withdrew financial support Sunday due to its controversial depiction of Shakespeare’s “Julius Caesar,” where a look-alike of President Donald Trump plays the titular character and is assassinated.

Though the free Shakespeare in the Park play has been in previews since May, criticism intensified over the weekend as Fox News blasted the interpretation. Trump’s oldest son, Donald Trump Jr., also questioned the source of the play’s funding on Twitter. The play officially opens on June 12.

“No matter what your political stance may be, the graphic staging of ‘Julius Caesar’ at this summer’s free Shakespeare in the Park does not reflect Delta Air Lines’ values,” Delta said in a statement. The airline has ended its sponsorship for the theater entirely.

“Their artistic and creative direction crossed the line on the standards of good taste,” the statement continued. “We have notified them of our decision to end our sponsorship as the official airline of the Public Theater effective immediately.”

Bank of America has only pulled its funding for the play specifically.

“The Public Theater chose to present Julius Caesar in such a way that was intended to provoke and offend,” Bank of America wrote in a statement posted on Twitter. “Had this intention been made known to us, we would have decided not to sponsor it. We are withdrawing our funding for this production.”

The production, which is one of several free Shakespeare plays slated for the summer, is performed in New York City’s Central Park and ends on June 18.

On Monday afternoon, the Public Theater defended its production and referred to the “heated discussion” surrounding the play as “the basis of a healthy democracy.”

“Our production of Julius Caesar in no way advocates violence towards anyone,” the theater said in a statement. “Shakespeare’s play, and our production, make the opposite point: those who attempt to defend democracy by undemocratic means pay a terrible price and destroy the very thing they are fighting to save.”

Based on true events, this Shakespeare tragedy follows Caesar’s victorious return from war as jealousy emerges among his peers Cassius and Brutus, who brutally stab and kill Caesar. The conspirators then grapple with the aftermath of Caesar’s death, which they claim was done for the good of Rome. The Public Theater’s version, however, forgoes togas and Roman imagery for a modern American setting. Actor Gregg Henry plays Julius Caesar while dressed in a suit, tie and blond hair. (Henry has also played a Trump-like politician on ABC’s Scandal.) Caesar’s wife, Calpurnia, speaks in a Slavic accent — a nod to First Lady Melania Trump. Caesar is eventually stabbed to death.

Oskar Eustis, the play’s director, wrote in a note that the play does not condone the assassination of political leaders: “Julius Caesar can be read as a warning parable to those who try to fight for democracy by undemocratic means,” he wrote. “To fight the tyrant does not mean imitating him.”

No other corporate sponsors of the Public Theater — which include the New York Times and American Express — have announced withdrawal of any financial support as of this writing. American Express, however, clarified on Twitter that its sponsorship of the theater doesn’t include the Shakespeare in the Park, adding the company doesn’t “condone the interpretation of the Julius Caesar play.”

The National Endowment for the Arts, an independent federal agency dedicated to promoting the arts that faces budget cuts from the Trump Administration, said no American tax dollars were used to produce this production. While the agency has funded Shakespeare in the Park productions in the past, it did not do so for “Julius Caesar” this year.

The Public Theater, located in New York City’s Lower East Side, was home to mega-hits Hamilton the Musical and Fun Home before they opened on Broadway. And its sponsors’ decision to pull funding for the production was met with scrutiny from some people on social media, especially as news came during the 71st Annual Tony Awards held Sunday night.

However, some Trump supporters were pleased with the decision.

Uproar over the play’s depiction of the president comes after comedian Kathy Griffin came under fire for participating in a photo shoot where she holds Trump’s fake, bloody head. CNN fired Griffin, who appeared on the news channel’s New Years Eve coverage, after the photo was published.

Bank of America has not yet responded to request for comment. 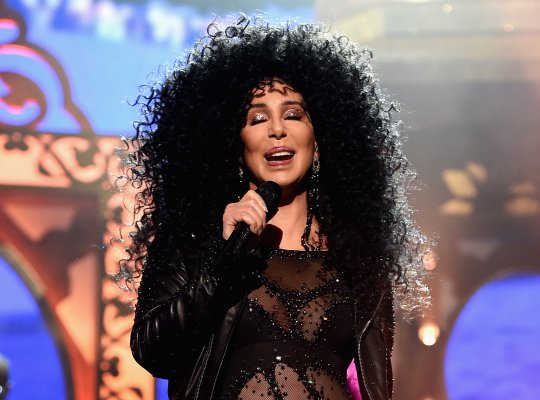 Cher Musical May Be Headed to Broadway
Next Up: Editor's Pick