'I Am Ready to Let It Go.' Katy Perry Discusses Why She Forgives Taylor Swift

In the hubbub around the release of her new album Witness, Katy Perry went on the record to extend an offer of peace to Taylor Swift after a longstanding spat that dates back to 2014.

“I am ready to let it go,” Perry said Saturday during a podcast interview with media mogul Arianna Huffington. “I forgive her and I’m sorry for anything I ever did, and I hope the same from her. I think it’s actually like, I think it’s time. There are bigger fish to fry, and there are real problems in the world,” she continued. “And I love her, and I want the best for her. And I think she’s a fantastic songwriter, and I think that, you know, if we, both her and I, can be representatives of strong women that come together despite their differences, I think the whole world is going to go like, ‘Yeah, well we can do this.’”

The “Swish Swish” singer explained on Carpool Karaoke that she and the “Bad Blood” singer have been at odds since a disagreement over backup dancers, kicking off a professional rivalry turned personal.

Perry has spent some of her press time before Witness‘s release openly discussing her status with Swift. For her part, Swift has remained publicly silent on the subject. She did, however, release her back catalog of music to streaming services on the same day that Perry’s album dropped, inspiring a great deal of fervor as her fans continue to wait for new music.

Back in 2016, Perry had said she would be open to working with Swift if her fellow singer would say “sorry.” 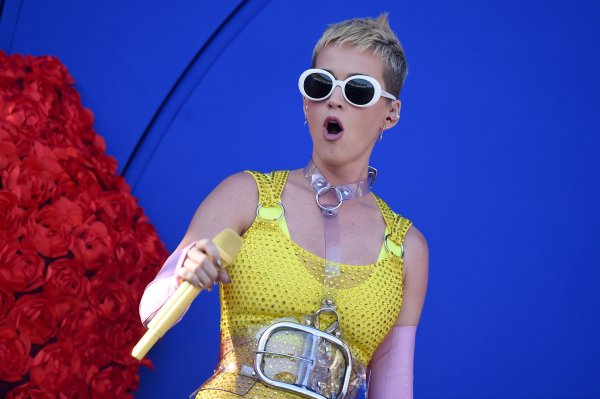 Katy Perry Responds to Accusation of Cultural Appropriation
Next Up: Editor's Pick