Why You Need to Listen to Nancy, a Radically Honest Podcast on LGBTQ Issues

The first season of Nancy, a new podcast from WNYC, doesn’t hesitate to get personal. The first episode began with hosts Tobin Low and Kathy Tu interviewing their respective parents about their radically different experiences coming out to their families. The pilot set the stage for a series of emotional stories shared by the hosts and guests about the LGBTQ experience, from unpacking what it means to be a gay Republican to a conversation between an older and younger man about their HIV diagnoses to heated arguments over Dumbledore’s sexuality.

The most recent episode, which dropped Sunday, may be the most emotional yet. For the one-year anniversary of the Pulse nightclub shooting in Orlando, which left 49 people dead, Low and Tu traveled to Florida to talk to people affected by the shooting — literally or emotionally — and reflect on how the community has responded and recuperated since the attack.

TIME spoke to Lowe and Tu about the episode, the pressure of becoming leading voices on LGBTQ issues and the surprising feedback they’ve gotten from their listeners.

TIME: You say at the end of your preview episode, “By the way we’re both Asian. You thought you were listening to white people this whole time. That’s on you.” Were listener assumptions about your race an issue working in the audio world, and how did you decide how to address it?

Low: I think that that joke came off as light and breezy, but there was a real intentionality about it, too. There’s an expectation that people of color in the media will just talk about what’s hard about being underrepresented. And that line was supposed to be like, “That’s going to be a thing when I say it is a thing.” We’re going to share our lived experiences instead of talking about what’s hard all the time.

Tu: It’s the same thing being a queer person.

Low: It’s about the experience of living as a queer person, and not about the idea of queerness.

In the first episode, you each interviewed your parents about your experiences coming out to them. How did it feel to share such a personal story in such a public way?

Tu: Well, I only share personal stories on this podcast. I joked the other day, “Okay for season two, what emotional journeys do you guys want me to go on?” When I hear somebody be vulnerable on a podcast it reaches me in a way that somebody face-to-face telling me wouldn’t have the same impact.

So for me it’s not a difficult thing. It’s more the people that I pull into these emotional journeys and whether or not they want to go on this trip with me. With my mom, I told her what I was doing, but I think she’s still confused about what a podcast is. I did eventually show her the episode. She was like, “Ugh I don’t like the way my voice sounds,” which everybody says. And then she was like, “I stand by what I say.” So she didn’t have any objections to being recorded, which I was actually surprised by. But I did tell her it was for work, and she’s always on board with anything that’s work or school related.

Low: When we started the first episode with both of us sharing very personal stories, it sort of lays the gauntlet down for other people to also share their stories because we’ve done it and it’s a space for that.

In your most recent episode, you say that you’ve learned about leadership working on this podcast. Heading into this podcast, did you initially think of yourselves as “leaders” or “representatives” of the LGBTQ community?

Low: No. Truly not. I think we have come to think of ourselves as proxies. People listen to the show and experience it through our reactions. But we’re not “experts.”

Tu: Even in our roles as proxies we have specific experiences. [Tobin,] you’re a gay person of color, and I’m a person of color who is, I should say bi—it’s complicated. But we’re limited by our own prejudices and biases. So we can only be proxies for so much stuff. That’s why it’s important to get other voices on the show.

But then there are so few podcasts like yours that people want their stories told through it.

Low: Right. I think it’s a representation thing. A show like Master of None comes to mind. So few — if any — people of color have gotten to write and lead their own series that many people haven’t seen people like themselves on TV. So then you wind up putting all your hopes and expectations on this one show. And I think that’s natural. Our intention is to be as empathetic as possible, and part of our responsibility is to receive critique and think about things in different ways.

Tu: It’s hard to be seen as individual when there’s not enough other people around. So we end up being a monolith without trying to be.

What have you learned from listeners?

Tu: For the episode where we did a mailbag and interviewed [actor and author] Mara Wilson, we went back and forth about which part should come first. We decided it made sense structurally to talk about the letters we’ve received, including people saying, “Let’s talk about bisexuality,” and using that to jump into the interview with Mara [who identifies as bisexual].

I got a few pieces of feedback that suggested we made bisexuality an afterthought, just a piece of mail or something. So that makes me think about how we structure our episodes. If we’re going to tackle a big topic like bisexuality, I wouldn’t put it in the context of mailbag again.

Low: And we should say we had booked that interview months in advance. When someone reaches out with a really thoughtful critique, I’m really touched by that because they really listened and understood what we’re trying to do, which is learn and continue the conversation.

Is your audience who you expected them to be?

Low: There was an email that said, “I’m a 55-year-old, cisgendered white man, and I love your show.” And that is kind of like, “We were not expecting you, sir, but welcome! Thank you for showing up.”

Early on we did a lot of thinking about it, and we actually even made a fake profile of who our ideal listener was. But we got to this point where we realized ultimately we were just describing ourselves. And so then the question becomes what would I listen to? And then I think the purpose of an editor outside of that or other voices is for people then to come in and say if you want to broaden it out, you might explain this term.

Right, you’ll often pause to explain why you’re using one term or another or what that means. I assume that’s for that broader audience.

Tu: I like to think of it as not so much that we’re explaining things for a straight audience, but there’s a lot of stuff that we don’t know about each other within the community. There was a segment that we did once that we killed where we were quizzing each other on terms within the gay community. And I got all of them wrong I think.

Tu: Yeah, exactly. So when we explain things I tend to think about it as, we’re not explaining for straight people. We’re explaining for ourselves, to make it clear what we’re talking about.

How did you decide you wanted to do an episode for the anniversary of the Pulse nightclub shooting?

Tobin: When Pulse happened, it wasn’t clear yet whether we were going to make Nancy, but I had such a strong feeling of I wish we had the show now.

There was a lot of reporting around Pulse last year. How did you decide what you wanted to do going back a year later that would be different?

Tu: We wanted to spend a week there, and basically see how people were dealing with the aftermath and how people were recovering. You said this a few times, Tobin, but when we talked to them it seemed like it was the first time they actually sat down and processed what they were feeling.

The podcast has covered some very serious topics and more lighthearted topics. How do you think about the tone of the podcast and how this episode fits in with the rest of the season?

Tu: I feel like it’s kind of a special episode. We don’t start off with our funny top, some conversation between the two of us. We make it very much about Orlando and the people there.

Low: Sometimes we talk about an episode of Nancy as having this emotional thing of you laugh, you cry, you laugh. And maybe that’s the prototype of a Nancy episode.

But then I think that’s also true of the larger season. And it’s important to recognize when it’s appropriate for Kathy and I to step back. We did that with the HIV episode. We’re basically not in that episode because it’s about those two men and their experiences. And I think similar to this episode: We’re there enough to hold your hand through it, but it’s not really about us. 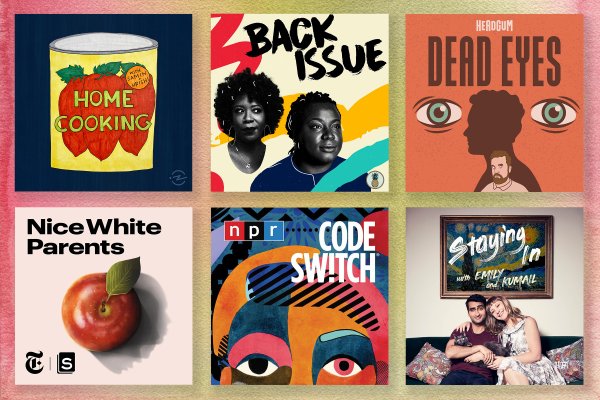