The FDA Wants This Opioid Drug Pulled From the Market

The U.S. Food and Drug Administration (FDA) requested on Thursday that the drug Opana ER be pulled from the market — the first time the agency has taken steps to remove a currently prescribed opioid pain medication from the market because of its potential for abuse.

The request, at this time, is voluntary. Opana manufacturer Endo Pharmaceuticals said in a statement Thursday that the company “is reviewing the request and is evaluating the full range of potential options as we determine the appropriate path forward.”

In an FDA statement announcing the request, Dr. Scott Gottlieb, commissioner of food and drugs, cited the country’s ongoing opioid epidemic as a reason for the agency’s actions.

“We will continue to take regulatory steps when we see situations where an opioid product’s risks outweigh its benefits,” he said, “not only for its intended patient population but also in regard to its potential for misuse and abuse.”

Opana ER (extended-release) was approved in 2006 for the management of moderate-to-severe pain when around-the-clock relief is needed. Because of the increased risks of addiction and overdose with extended-release opioids, doctors are instructed to prescribe Opana ER only to patients for whom alternative treatment options are ineffective, not tolerated or otherwise inadequate.

In 2012, Opana ER was reformulated with the intention of making the tablets more resistant to manipulation for abuse by snorting or injecting. But the FDA determined that there wasn’t enough data to show the reformulation could meaningfully reduce abuse — and it declined Endo’s request to tout any abuse-deterrent properties on the label.

Now, the FDA says it has concerns that the benefits of the drug no longer outweigh its risks. Following the product’s reformulation, the agency says, data has shown a “significant shift in the route of abuse of Opana ER from nasal to injection.”

Injecting the drug has been associated with a serious outbreak of HIV and hepatitis C, as well as cases of a serious blood disorder.

“When we determined that the product had dangerous unintended consequences, we made a decision to request its withdrawal from the market,” said Dr. Janet Woodcock, director of the FDA’s Center for Drug Evaluation and Research, in the FDA’s statement. “This action will protect the public from further potential for misuse and abuse of this product.”

If Endo chooses not to remove Opana ER from the market, the FDA intends to formally withdraw approval. The agency says it will also continue to examine the risks and benefits of all approved opioid pain medicines, “and will take further actions as appropriate as a part of our response to this public health crisis.”

In its own statement, Endo acknowledged that the misuse and abuse of opioids have greatly increased in the United States. But it also stresses that the FDA’s request “does not indicate uncertainty with the product’s safety or efficacy when taken as prescribed.”

It also notes that, while an FDA advisory committee voted 18 to 8 that Opana ER’s benefits no longer outweigh its risks, more than half of the committee members expressed their preference that the drug remain on the market with new regulatory restrictions.

Although official government data for 2016 has not yet been released, preliminary data compiled by the New York Times shows that U.S. drug overdose deaths last year most likely exceeded 59,000 — the largest annual jump ever recorded.

Overdosing — on opioids as well as illicitly manufactured drugs — is now the leading cause of death among Americans under age 50, the newspaper reported this week. 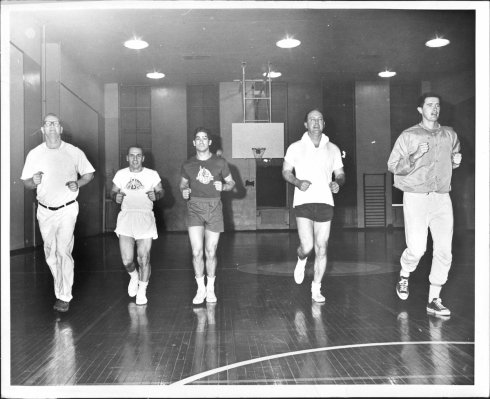 The Presidential Heart Attack That Got Americans Running
Next Up: Editor's Pick