How Long Can Theresa May Hold On as Prime Minister?

By Mark Leftly and Dan Stewart

The last time a British Prime Minister was humiliated in a vote they called themselves, they resigned the following day: That was David Cameron on June 24 last year.

Theresa May didn’t lose the general election on June 8 as Cameron lost the E.U. referendum, but she was certainly humiliated.

Having called the snap election to grow her parliamentary majority and give herself a mandate going into Brexit negotiations, she watched her party lose the first overall majority it had held in 18 years.

But, so far, she has clung to power as leader of the party with the largest share of the vote. In the briefest of statements outside 10 Downing Street, May said simply that she would form a minority government with the Democratic Unionist Party of Northern Ireland and pledged to guide the country through Brexit, keep it safe and “come together as a country.”

In the corridors of Westminster, however, knives were already being sharpened.

A Buzzfeed journalist tweeted that Boris Johnson, the Foreign Secretary, was already seeking opinions on a leadership bid even as the scale of the Conservatives’ embarrassment was becoming clear.

“We’ll fall in behind her but we’re talking about weeks,” a senior minister told Beth Rigby of Sky News. “She can’t continue [longer term] because her credibility is shot, not just at home but abroad … she can’t continue with a minority govt, she can’t deliver Brexit.”

The unnamed minister predicted another election in October.

Adding to the speculation, Johnson repeatedly refused to back her to continue in office on Friday, as bookmakers named him the favorite to be the next Prime Minister.

But Conservative lawmakers TIME spoke to in the hours after the vote said there was no appetite to remove May, despite the party’s losses.

“She’s safe for the foreseeable future, people want her to get Brexit started,” a member of the government said. “Whether she can last until the next general election [due in 2022] is questionable. My gut feeling is no — she’s good at governing but not at campaigning.”

They said she could, however, hang on until Brexit negotiations are ended in 2019.

“She could even leave when the deal is done and say ‘I defended my nation, this is my legacy.'” Few others would want the job, they added. “Who in their right mind would want to step into those shoes now and land themselves with that Brexit bag of c–p?”

Another senior minister tried to put a gloss on the dismal evening for the party.

“She got 42% of the vote, normally you would be over the f–king moon about that.” Conservative “pragmatism,” they said, was likely to keep her in office. “She got that share of the vote and won, so let her form a government.”

She’s done that now, but the sniping has likely only just begun. On Friday, her fellow lawmakers will catch up on sleep lost during a hectic 24 hours. Then they can begin strategizing, perhaps in time for Sunday’s newspapers and morning television shows. 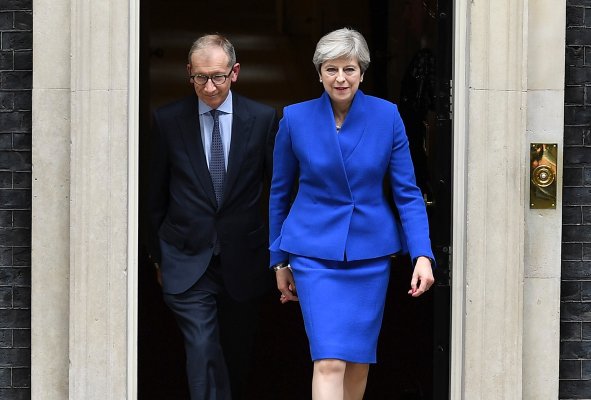 There's No Clear Winner in the U.K. Election. Here's What Happens Next
Next Up: Editor's Pick