Cortana, the name Microsoft’s given its response to Apple’s Siri virtual assistant, may turn out to be a bolder move for the company than I suspect many realize. For starters, she’s a character in a militaristic sci-fi video game that, for all its popularity in gaming-dom, locates her impetus well outside the entertainment mainstream — and as the historical purview of a very specific, mostly not-female demographic.

More importantly, from game one (released back in 2001 for the original Xbox) through Halo 4 (released in November 2012 for the Xbox 360), she’s been a sometimes controversial symbol. On the one hand, she’s a strong-willed and multidimensional female persona in a series that’s been fictively nuanced enough to draw the attention (and participation) of a Hugo and Nebula award-winning writer like Greg Bear. But she’s also a character who’s essentially imprisoned — literally in the series’ case — within the psyche of an adolescent male’s fantasy notion of a Campbellian hero figure: a simultaneously fleshed-out yet hyper-fleshy persona — she’s all but nude in these games, her female parts exponentially more detailed as console graphics and design techniques have improved — who appears in hologram form, Obi-Wan-like, only if Obi-Wan were a nubile pole dancer.

But perhaps that’s just my own biases as a clueless, culturally-compromised male showing through. What’s wrong with nudity (or near-nudity) anyway? Must attractive nearly-nude women be pole dancers? Am I selling pole-dancing short? Are people without clothes (or nearly so) mere sex objects? Is that just latent American prudishness on my part? Fear of female sexuality? Gender stereotyping? A kind of unconscious, compartmentalizing sexism? Is immobility itself necessarily reductive? Doesn’t that then sell the mobility-challenged short?

Or is there also something exploitive and sexist occurring in these games when you start thinking about their demographics and marketing? Does intentionality trump reception? What of Microsoft’s intentions? Do we presume too much? Surely the game’s writers are going to argue there’s nothing sexist about the character.

The question seems to be whether players should celebrate a character like Cortana for her depth and poise (though it’s worth noting that she loses her mind in the most recent game), or view her cynically, as an imprisoned, hyper-sexualized plot actuator — a ploy to titillate the game’s target adolescent male demographic.

And now she’s the name Microsoft’s given its Siri competitor, a Windows 8.1 assistant voiced by the same person responsible for Cortana’s Halo incarnation (Jen Taylor).

Forget Halo for a moment. What about this idea that the personality — and both Apple and Microsoft clearly want us to view Siri and Cortana as personalities — is female and not male, responsible for what amount to secretarial duties like creating alarms, reminders and appointments? To be fair, Apple has a male voice option in iOS, but does anyone use it?

In Microsoft’s case, it sounds like Cortana is female-only, in keeping with her video game persona. So does all the internal testing I presume Apple and Microsoft have been doing suggest people want their servile computer algorithms, just like the computer in Star Trek, to be female? If so, what does that say about us?

This isn’t an indictment of what Microsoft demonstrated at its Build conference yesterday, which from an algorithmic standpoint sounds pretty cool — another step on the very long road toward fully semantic computing, where your computer understands not only what you want to know, but the context in which you want to know it.

I’m just asking the question, because there’s a history here, and in Cortana’s case, one that reaches back over a decade and across one of the fastest-growing (and at this point, greatest revenue-generating) entertainment mediums in history. I don’t have a satisfactory answer yet, but I think it’s important to be mindful that there is a history here, and that we should at least be thinking about its potential implications as we engage with these applications rolling forward. 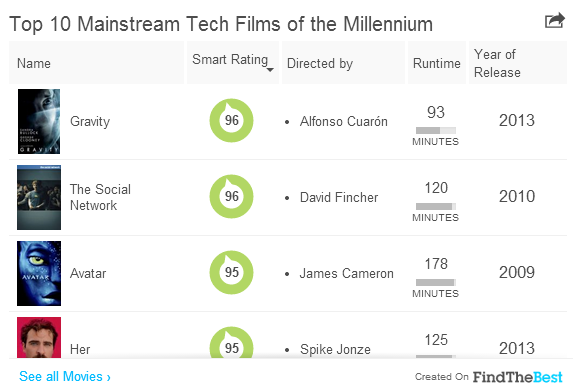 The Top 10 Tech Movies of the Millennium
Next Up: Editor's Pick