Who Won the Comey Hearing? Russia

If the Russians wanted to sow chaos and distrust in American democracy, Thursday’s testimony from dismissed FBI chief James Comey helped deliver on their goal.

For almost three hours under the bright lights of Capitol Hill, Comey answered senators’ questions about his interactions with Donald Trump, the unconventional figure whose campaign for President is the subject of an investigation about just how deeply Russian agents penetrated America’s politics. In the process, Comey helped grind away at the already splintered confidence in democratic systems, including the long-held expectations that the FBI is independent of political influence, and called into question the very integrity of the nation’s elections.

“I took it as a direction,” Comey said of Trump’s suggestion that he drop his investigations.

The lasting impression was that Trump had obstructed justice—the same charge that was Richard Nixon’s downfall. Comey didn’t offer a legal conclusion but clearly laid out a case that special counsel Robert Mueller could build criminal charges against the President. Comey also said he shared his contemporaneous notes from his sessions with Trump with Mueller.

Repeatedly, Comey spoke to his firing, which in itself was previously unthinkable. Comey also seemed intent on settling a score with the President, who in the FBI chief’s telling sought to develop an I-scratch-your-back-you-vindicate-my-national-security-adviser situation. “I’m hopelessly biased,” Comey said, indicating he lost his job and the FBI its chief because the President felt threatened by an investigation circling him.

That investigation is ongoing, even after Comey’s ouster. Trump’s attempt to shut it down by firing the FBI chief only made it worse, in fact. “The work is going to go on as before,” Comey said. Now, he is out of government and free to speak his mind — especially about his highly unusual one-on-one conversations with the President. “Those were lies, plain and simple,” Comey said of the President’s rationale for firing him.

Russia clearly came out ahead after the session. The integrity of America’s justice agencies was under fire. An ousted FBI chief, the nation’s top cop, suggested the President of the United States was a serial liar who has only a passing relationship with the truth. The same official said he asked a friend at Columbia University to leak memos to reporters, already facing low poll numbers.

The President’s legal standing has never been less secure, which could spook Wall Street. Concern about improper influence of political appointees was back as a bogeyman, as were Bill and Hillary Clinton. The fact Russia put its thumb on America’s elections—and got away with it—screamed for answers. And at the White House, a spokeswoman was left to make the remarkable claim that the President is not a liar.

None of this is normal or helpful for an electorate with fleeting confidence in its democratic systems. Which is precisely why Russia started down this path. The United States’ idealized place in the global pecking order is secured, in theory, because of its commitment to democracy: fair elections, transparent government, accountable leaders, a government’s sovereignty. Each is now under assault, either through Russian meddling or the President ushered to power by it. Russia is looking to benefit from this zero-sum fight, and its clear its former-KGB agent president has ideas.

From the start, Comey made clear he had zero doubts Russia attempted to interfere with the election of 2016. He repeatedly indicated he had plenty of evidence that he couldn’t share while reporters were in the room. “That’s a question I don’t think I should answer in an open setting,” Comey said time and again. Lawmakers rushed from the open-to-the-public session to the closed one, hoping to find more clarity about just what the feds have uncovered about the President and those around him.

(For their part, Trump’s loyalists and lawyers spun the day as a win for the President. They argued that Comey repeatedly told the President he wasn’t under investigation. What they missed, though, is that the FBI investigates crimes, not criminals. They start with a situation and move to individuals once they understand the facts.)

What Comey could say, however, left a rather dim view of a President, who apparently attempted to pressure his FBI chief to shut down investigations into Russia’s influence operations in 2015 and 2016. The narrative read like a political thriller, but executed with Veep-like competence. “There clearly remain a lot of questions,” said Sen. Mark Warner, the top Democrat on the intelligence panel. “We’re going to get to the bottom of this.”

But then what? Justice, as Americans expect it, would only grate at democratic institutions if Comey’s allegations are proved. And that gives Russia yet another victory its new cold war with the United States. 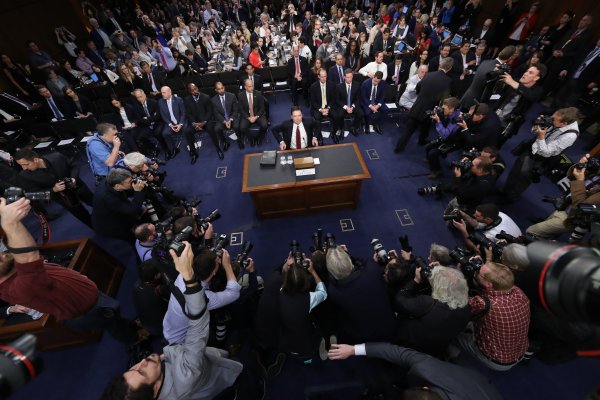 Here's What It Was Like Inside James Comey's Hearing
Next Up: Editor's Pick