Lucy Richards of Brandon, Fla. Richards has pleaded guilty to threatening a man whose 6-year-old son was killed in the 2012 mass shooting at a Connecticut school, which she believed was a hoax.
Paula McMahon/South Florida Sun-Sentinel & Jorge Milian/Hillsborough County Sheriff's Office—AP
By Lisa Marie Segarra

A woman who claimed the Sandy Hook school shooting was a hoax was sentenced to five months in prison after she pleaded guilty to threatening a 6-year-old victim’s father.

Lucy Richards, 57, pleaded guilty to one count of sending threats through interstate communications, according to the Washington Post. Richards admitted to sending the father a message that read, “LOOK BEHIND YOU IT IS DEATH.”

Prosecutors alleged that Richards left voicemails and emails to the Sandy Hook shooting victim’s father last January. However, three of the four charges initially brought against Richards were dismissed as part of the plea deal.

Richards is part of a group of people who believe the Sandy Hook school shooting was a hoax used to push support for gun control, despite there being no evidence for such claims, the Post noted.

After serving five months in prison, Richards will be on house arrest for another five months, according to the report. Richards will then spend three years on supervised release and will have to record her computer activity during that time.

Reuters and the Associated Press have identified the man who was threatened as Lenny Pozner, citing court documents that referred to the recipient of Richards’ threats as “L.P.”

Pozner’s 6-year-old son Noah was killed in the 2012 shooting. 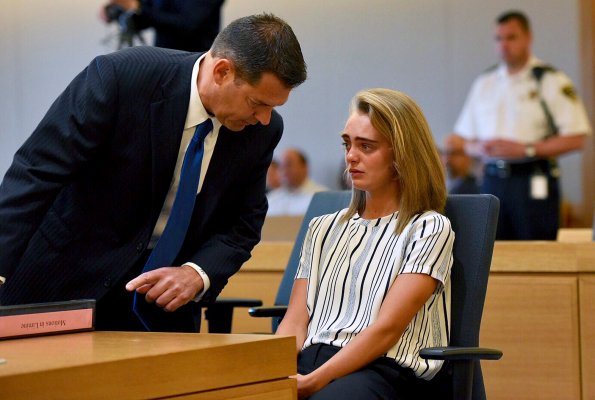 She Allegedly Coaxed Her Boyfriend to Kill Himself. Now She's on Trial
Next Up: Editor's Pick