In Defense of Kevin Durant

Kevin Durant of the Golden State Warriors in Game 3 of the 2017 NBA Finals at Quicken Loans Arena, on June 7, 2017 in Cleveland.
Ronald Martinez—Getty Images
By Sean Gregory

Loyalty is on trial these days, all over our screens and smack in our faces. The two biggest media obsessions of the moment — former FBI director James Comey’s Senate testimony about his interactions with President Donald Trump, and, naturally, the NBA Finals — share a somewhat surreal connection.

They both test the price of allegiances.

Comey apparently rejected a president’s request for loyalty, setting off a storm that could imperil an administration. Last summer, Kevin Durant eschewed loyalty to a the small-market franchise he helped build into a winner, the Oklahoma City Thunder, choosing to sign with the Golden State Warriors, a team already stocked with All-Stars and an MVP — and now one win away from a second championship in three years. Clearly, Durant’s relationship with loyalty is far less consequential than Comey’s.

But darn if loyalty isn’t a touchy subject that riles everyone up.

For Durant is sure under fire. He’s one of the more graceful, enticing players the NBA has ever seen, and an overall good guy — remember his touching 2014 MVP news conference, when he thanked his teammates and paid tribute to his mom while fighting back tears? Still, many fans and critics can’t forgive him for supposedly taking the easy way out, signing a free agent deal with Golden State, a team that had won a record 73 regular season games without him last season, and worse, had beaten his Thunder in the 2016 Western Conference finals. “That was tough for anybody, anybody’s that’s competitive, to watch,” Los Angeles Clipper coach Doc Rivers said in a recent interview. “He lost, and then he joined.”

The Warriors blew out Cleveland in the first two games of the NBA Finals, and are on the brink of a sweep after Wednesday night’s 118-113 comeback win in Game 3. This third straight Finals meeting between LeBron James’ Cavaliers and the Warriors was dubbed “the Thrillogy.” But Golden State has won 15 straight playoff games. With one more victory, the Warriors would become the first team in NBA history to finish the playoffs undefeated. A Warriors title feels inevitable — no NBA team has ever recovered from an 0-3 deficit to win a series.

So the drama has fizzled, and many fans are peeved. Durant — who’s averaging 34 points, 52% shooting from three-point range, and 10 rebounds a game in the Finals — is a easy target for ridicule. By his very presence in a Warriors uniform, he’s hacked the Finals and ruined a rivalry.

But despite his move to Silicon Valley, Kevin Durant is no killer app automating NBA championships. Basketball success is quite analog. He’s still sweating and running and summoning the intestinal fortitude to dribble down the floor with 45 seconds left in Game 3, down two points on the road in Cleveland, and make a three-pointer over the heir to Michael Jordan, James himself, to give the Warriors their lead back for good. That shot could be the signature moment of his outstanding career. It sure wasn’t easy.

Yes, Durant’s teammates are paving his path to a first NBA title. When you join forces with Stephen Curry, Klay Thompson and Draymond Green, championships come easier than they did in Oklahoma. If Durant’s disloyalty to the Thunder leaves a bitter taste, fair enough. But ever since his freshman season in Texas, Durant has been a singular talent, a 7’4″ wing-spanned pterodactyl who can do anything with a basketball. He’s avoided any whiff of trouble, and conducted himself with class.

No player is more deserving of an NBA title. Loyalty to truth matters, too. 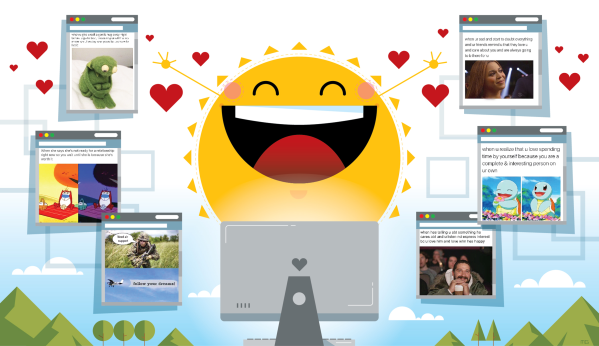 How the Internet Is Getting a Little Nicer, One Meme at a Time
Next Up: Editor's Pick