Donald Trump’s Loyalty Pledge for the FBI Challenges the Nation

Few things are more important in a democracy than confidence that the law is applied equally and fairly to all. Which is why the written testimony of former FBI Director James Comey to Congress, released on June 7, was so unsettling. In it, Comey detailed an escalating effort by President Donald Trump to get Comey to pledge his loyalty and to back off elements of the probe into whether members of the Trump campaign team cooperated with Russia during and after the 2016 election.

The difficult relationship between Comey and Trump began during the presidential transition in early January. After a briefing by the country’s top intelligence officials on the Russian operation, Comey stayed behind to brief the President-elect alone on “personally sensitive aspects of the information” the intelligence community had collected, including what Comey called in his testimony “salacious and unverified” allegations about Trump. Comey assured Trump he wasn’t a target of an investigation, a fact that Trump’s personal attorney later cited as vindication of the President’s conduct during the campaign. But Comey felt sufficiently uncomfortable about the conversation to document it afterward in a memo, typed into a laptop as he was driven away from the Trump Tower meeting in New York City. It was a practice Comey would continue in the coming months.

A week after his inauguration, Trump called Comey to a private dinner at the White House, served by two Navy stewards, without anyone else in the room. Trump said he was considering ordering an investigation of the most salacious claims to reveal them as falsehoods and asked Comey if he wanted to keep his job. “My instincts told me the dinner was, at least in part, an effort to have me ask for my job and create some sort of patronage relationship,” Comey wrote. And indeed moments later, Trump said, “I need loyalty, I expect loyalty.” Comey froze. “I didn’t move, speak or change my facial expression in any way during the awkward silence that followed,” Comey said. “We simply looked at each other in silence.” At the end of the dinner, when Trump again tried to elicit Comey’s loyalty pledge, Comey responded, “You will always get honesty from me.”

Trump again tried to pressure Comey in private in a Feb. 14 meeting in the Oval Office after he dismissed from the room a half-dozen other top advisers at the end of a counterterrorism briefing. Trump had fired his first National Security Adviser, Michael Flynn, the day before for lying about contacts he had had with the Russian ambassador to the U.S. during the transition. Trump asked Comey to “let this go,” which Comey took to mean that the President was “requesting that we drop any investigation of Flynn in connection with false statements about his conversations with the Russian ambassador.” Comey left the meeting rattled and consulted top FBI leadership over how to ensure that Trump’s effort to derail the Flynn investigation didn’t “infect” those working on the probe at the FBI.

Trump wasn’t done. On March 30, Comey testified, Trump called Comey and “described the Russia investigation as ‘a cloud’ that was impairing his ability to act on behalf of the country … and asked what we could do to ‘lift the cloud.'” Trump asked Comey to “get it out that we weren’t investigating him.” Comey reported the conversation to Acting Deputy Attorney General Dana Boente. In a subsequent phone call on April 11, Trump again asked for help from Comey, who suggested he raise his concerns with the Justice Department. “Because I have been very loyal to you, very loyal; we had that thing you know,” Trump said on the call, according to Comey, who wrote in his statement he did not know what “that thing” was.

Trump fired Comey on May 9, triggering accusations that the President was interfering in the Russia probe. Investigators still don’t know whether members of Trump’s campaign did anything inappropriate or criminal with the Russians. But everyone who cares about the credibility of our democracy should want the FBI to pursue the facts wherever they may lead, unimpeded by the interests of any one person, including a President. 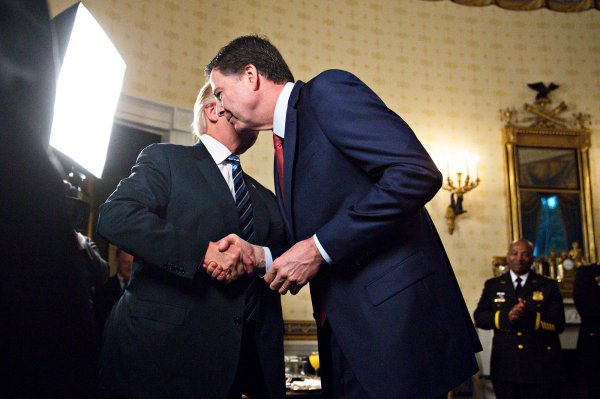 Poll: 61% of Americans Think President Trump Fired James Comey to Protect Himself
Next Up: Editor's Pick