Jakarta's Christian governor Basuki Tjahaja Purnama, popularly known as Ahok, arrives at a courtroom for his verdict and sentence in his blasphemy trial in Jakarta on May 9, 2017.
Isra Triansyah/ Sindonews.com/ Pool/Anadolu Agency—Getty Images)
By Nicola Smith

The life of the former governor of Jakarta, a Christian sentenced to two years in jail for blaspheming Islam, may be in danger if he is forced into one of Indonesia’s most notorious prisons, his family and supporters have warned.

The harsh sentence imposed on Basuki Tjahaja Purnama, known by his nickname Ahok, on 9 May, left secular but Muslim-majority Indonesia reeling in shock. His devastated relatives fear the worst may yet be to come.

After his conviction, Ahok was spirited out of Jakarta’s Cipinang Penitentiary, a Dutch colonial-era high-security prison now infamous for its overcrowding and hosting of convicted drug offenders and Islamist militants.

Fearing he could be a high profile target within the prison walls, the authorities moved him by night to a safer police compound on the capital’s outskirts, but a high court appeal ruling due any time before the end of July could send him back.

“Many corrupt [people] hate him in that jail, the extremist ideologue is there, the terrorist is there. That jail is for everyone. Who can guarantee his security? So I said please don’t bring him back there,” his sister and head of his legal team, Fifi Lety Indra, tells TIME.

“We are thankful that where he is now is safe. We don’t want him to be moved.”

Ahok’s two year jail term blindsided both his supporters and the prosecution, who had asked for a one year suspended sentence.

It was a stunning downfall for the once hugely popular governor, and close ally of President Joko Widodo, who was widely admired for his drive to tackle Jakarta’s deep-rooted infrastructural problems, including its gridlocked streets.

His troubles began last September while campaigning for re-election, when he suggested political rivals were using a Koranic verse to trick people into voting against him as a non-Muslim.

An edited version of his speech went viral and fundamental Islamist groups accused him of insulting Islam’s holy book, demanding he be jailed under draconian blasphemy laws.

Ahok denied the blasphemy allegation and apologized for the comments, but tens of thousands of protestors, led by the Islamic Defenders Front, a group accused of inciting violence, took to the streets in mass rallies.

His trial, which began late last year, took religious tensions in Indonesia, the world’s largest Muslim-majority nation, to their highest in years.

The case was seen as a bellwether of religious pluralism. His shock conviction has been interpreted as a sign of the growing influence of a hard-line Islamism that the government and judiciary are reluctant to oppose.

“We hope it’s not too late. So my brother basically is the test case of this — whether intolerance is going to win, or tolerance will win. The high court decision will determine it too,” says Indra.

Ahok chose not to appeal the conviction “for the good of the nation.” Tensions threatened to spill over during the fasting month of Ramadan between extremist opponents and aggrieved supporters. The decision achieved an uneasy calm.

However, the prosecution, whose demands for light punishment had been overruled by the five-judge panel, pressed ahead with their own high court appeal. That decision could bring relief to Ahok, or impose more severe conditions, including a return to Cipinang.

His family are nervous. “If the high court does not rule in favor of my brother or even makes it worse, I think you cannot stop the silent majority any more,” says Indra.

Many moderate Muslims support Ahok, and voted for him in his failed re-election bid in April.

“The moderate Muslims are also speaking out. They say we want one nation, we want to go back to the constitution,” says Indra.

“The silent majority are now trying to speak up. They say that this is our nation too. We are Indonesian too. Even if we are non-Muslim, we want to serve our nation as well, and we have the same rights.”

“If a talented, popular governor could be brought down and jailed because of religion, what fate awaits the country’s grassroots religious minorities and Sunni Muslims who do not subscribe to radical Islamist ideology?” he asks.

The United Nations has urged Indonesia to release Ahok and repeal its blasphemy laws, which disproportionately target minorities.

Andreas Harsono, Indonesia researcher for Human Rights Watch, argues that blasphemy cases have snowballed in recent years because political parties are too afraid to oppose extremists.

“The threat is very serious. I wouldn’t be surprised if in the next decade or two Indonesia will be an Islamist country,” he says.

The nature of Ahok’s conviction increases the risk for him at Cipinang, he believes. “There are a lot of lone wolves who think they will do something good if they attack an alleged blasphemer.” 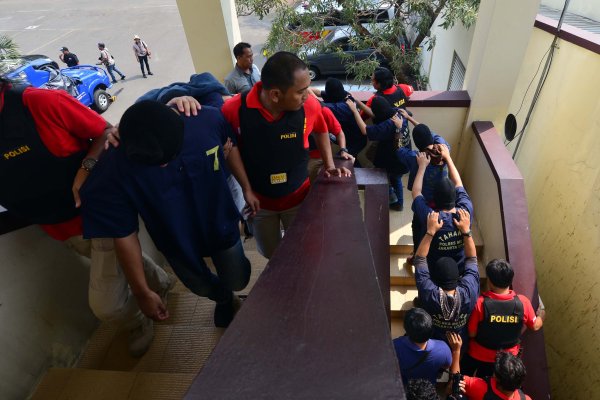 Indonesia Arrested 141 Men at an Alleged Gay Sauna Party
Next Up: Editor's Pick