Former FBI Director James Comey will describe in vivid detail the different interactions he had with Donald Trump since he was elected President in his hotly anticipated congressional testimony on Thursday, confirming for the first time himself explosive reports that Trump asked him to pledge his loyalty and to drop an investigation into former National Security Adviser Michael Flynn.

“The President said, “I need loyalty, I expect loyalty,” Comey will tell the Senate Intelligence Committee, according to prepared testimony released Wednesday. “I didn’t move, speak, or change my facial expression in any way during the awkward silence that followed.”

Comey had nine one-on-one conversations with the President in four months, three in person and six on the phone, and, out of his own volition, wrote detailed memos after every conversation, a practice he said he had not done during the Obama presidency. All of the in-person encounters are described in the testimony, as are two of the phone calls, including their final interaction, an April 11 phone call.

Included in these encounters are the three instances where Comey tells the President he himself is not under investigation, an assertion Trump cited in his letter terminating Comey and in a subsequent interview with NBC News. Comey made these comments on January 6 and January 27, in person, and on March 30 in a phone call.

This is the first time Comey has spoken publicly about his interactions with Trump since he was fired in May. The lengthy prepared testimony backs up, in Comey’s own words, a series of news reports since Trump fired him last month — that his interactions with Trump left him uncomfortable and he asked Attorney General Sessions not to be left alone with him, that certain requests caused him to fear for the FBI’s independence amid an investigation into possible connections between Trump’s campaign and Russia, and that he demurred when asked to pledge his loyalty.

In great detail, Comey describes the way Trump asked to see him alone in the Oval Office February 14, asking all of his aides to leave before requesting that he halt an investigation into Flynn, who had just resigned.

“When the door by the grandfather clock closed, and we were alone, the President began by saying, “I want to talk about Mike Flynn,”’ Comey wrote about this interaction. “He repeated that Flynn hadn’t done anything wrong on his calls with the Russians, but had misled the Vice President. He then said, “I hope you can see your way clear to letting this go, to letting Flynn go.”

The New York Times reported this development, citing a Comey memo, on May 16. The White House denied the Times report at the time, telling the paper, “The president has never asked Mr. Comey or anyone else to end any investigation, including any investigation involving General Flynn.”

Comey, who publicly confirmed in March that the FBI was investigating whether Trump associates had colluded with Russian officials in their attempts to meddle in the 2016 presidential election, wrote that he was under the impression that Trump was only referring to possible investigations surrounding Flynn not the broader investigation into Russian influence. But, he writes, the request was still “very concerning, given the FBI’s role as an independent investigative agency.”

He declined to report the development to Sessions, because he believed he was likely to recuse himself from the Russia investigation. Comey did however, write that he spoke to Sessions and told him it was inappropriate, confirming another development reported in the New York Times.

Ahead of Comey’s testimony on Thursday, Trump said simply, “I wish him luck.” But behind the scenes, the Administration and his allies have been preparing to rebut his testimony and discredit him.

“President Trump was right. Director Comey’s statement reconfirmed what the president has been saying all along – he was never under investigation,” Republican National Committee Chairwoman Ronna Romney McDaniel said shortly after the Senate Intelligence Committee released Comey’s testimony.

Hours later, Trump’s outside counsel, Marc Kasowitz, echoed those sentiments on behalf of the President.

“The president is pleased that Mr. Comey has finally publicly confirmed his private reports that the President was not under investigation in any Russia probe,” the attorney wrote in a statement. “The president feels completely and totally vindicated.”

“He is eager to continue to move forward with his agenda,” Kasowitz added.

Deputy White House Spokeswoman Sarah Huckabee Sanders told reporters she found the timing of the testimony’s release “a little bit interesting” given Wednesday’s Senate hearing, where Director of National Intelligence Dan Coats said he was never pressured to intervene in an ongoing investigation, but wouldn’t comment on whether Trump had asked him to influence the FBI’s investigation into Flynn.

Trump’s decision to terminate Comey immediately sparked outrage in both parties because he was firing the person directly overseeing the investigation into his campaign. Trump had initially cited Comey’s handling of the investigation into Hillary Clinton’s private email server during the campaign as the reason he fired Comey, but he acknowledged just two days later in an interview with NBC News that the Russia investigation was a factor.

“When I decided to just do it, I said to myself, I said you know, this Russia thing with Trump and Russia is a made up story,” Trump said. “It’s an excuse by the Democrats for having lost an election that they should have won.”

Trump did not respond to shouted questions from reporters after returning to the White House Thursday from Ohio, where he was touting his infrastructure initiative. 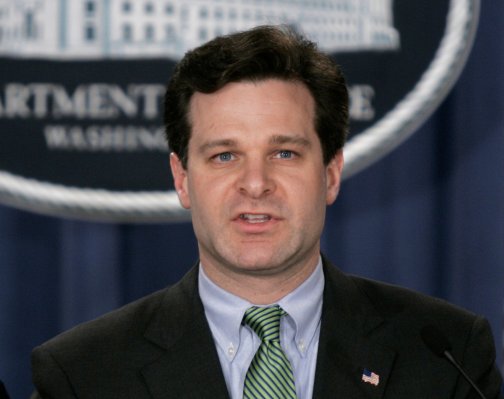 What to Know About President Trump's New FBI Pick Christopher Wray
Next Up: Editor's Pick