How Donald Trump Has Dishonored the Meaning of D-Day

The grave of an unknown soldier is shown at the Normandy American Cemetery June 5, 2014 in Colleville-sur-Mer, France.
Win McNamee—Getty Images
Ideas
By Daniel Benjamin
Benjamin, who served as Coordinator for Counterterrorism at the U.S. State Department, is director of The John Sloan Dickey Center for International Understanding at Dartmouth College.

A short story for the anniversary of D-Day: Thirty-two years ago, I was a student in England finishing up a degree. After sitting for my exams, two American friends and I headed off to Normandy for sightseeing. In my friend Tim’s ancient Morris Minor — I was sure at some point the engine would give out, and we’d have to punch through the thin floor and propel it with our feet — we visited the fabulous abbey at Mont St. Michel, the cathedral in Rouen and the apple-heavy countryside, the lush setting of Madame Bovary. And of course, we visited the beaches and the cemeteries. It was July but still gray, cool and rainy.

Dr. Johnson famously remarked when visiting the Scottish island Iona, fountainhead of Christianity in northern Europe, “That man is little to be envied, whose patriotism would not gain force upon the plain of Marathon, or whose piety would not grow warmer among the runs of Iona.” The American whose patriotism and piety aren’t moved by the serried rows of crosses and stars amid vast fields of perfect green is hardly imaginable.

One evening, we didn’t have a reservation anywhere, so when we saw the sign for “chambres,” we turned into the long drive up to a 17th-century chateau and knocked on its massive wooden door. The place was being transformed into an inn, but the sign had been premature — the establishment wasn’t open yet. Nonetheless, the new owners took pity on us and invited us to stay.

They were Parisians, they told us, who had moved to the country and bought the place. I guessed they were Left Bank intellectuals, though he was, in fact, a lawyer with an unkempt beard. The United States wasn’t very popular in Europe in those days: Ronald Reagan was president and deeply unloved on the continent — he was seen as a lightweight and dangerously cavalier about the confrontation with the Soviet Union. The controversy over stationing medium-range nuclear missiles was playing out, and the peace movement was in full bloom, with large demonstrations and much heated rhetoric. So when the owners invited us into the kitchen for a round of Calvados with them, I was uncertain where it would all lead.

“What do you do?” they asked each of us. We told them we were students. Tim said he would continue studying economics in the U.K. I said I was heading home to work in journalism. There was a pause, and Mark announced he would be returning to the U.S. to be an officer aboard a submarine in the U.S. Navy. He explained that he had graduated from the Naval Academy, had enjoyed his time abroad and now had to fulfill his service commitment.

There was another pause — a long one. If our host had said, “Try not to get us all blown up,” I wouldn’t have been surprised. Instead, he lifted his glass and declared simply, “To the American Navy, without whom we would not be here.”

Frisson is probably the best word to describe the feeling of the moment: A feeling of sudden interior weightlessness, a brief electrical charge through the limbs that signified a moment out of time, an instant of seriousness, a connection with the historic.

That was many years ago, but after living in Europe for years, marrying a European and working as a diplomat with Europeans, I’ve never forgotten that moment and how an event then 41 years in the past created a bond between seeming strangers.

Reagan might have been objectionable to some, but most leaders across Europe understood him and his commitment to the idea of the West. With President Donald Trump, there is no such commitment, and no respect. After President Donald Trump’s insults to our allies at the NATO summit and his refusal to affirm, as his senior advisors wanted him to, our commitment to collective defense — which he then followed up with his petulant, paranoid (“They’re laughing at us”) withdrawal from the Paris Climate Accord — we’re left to wonder if anyone will still turn back to June 6, 1944 and feel much of anything.

That our future is endangered by the damage to our ties with our allies is obvious enough. But Trump’s wreckage also threatens the living connection to our past — to events that framed the lives of millions born afterward — relegating it to museums and picture books, wrung of all human feeling. 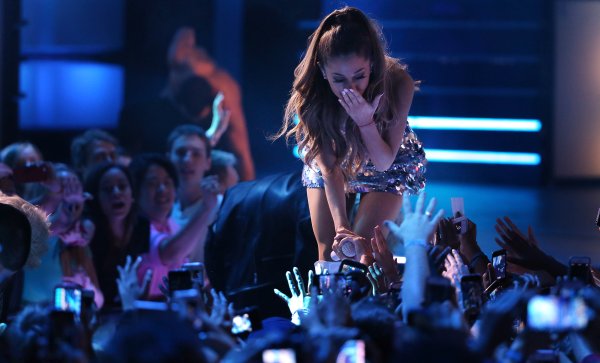 How to Watch Ariana Grande's 'One Love Manchester' Benefit Concert
Next Up: Editor's Pick