Fifth Harmony is perhaps the biggest girl group in the world right now, thanks to the blockbuster success of mega-hits like last year’s “Work from Home,” a tour that’s taken them around the globe and a deeply devoted fandom. But the squad of young vocalists — convened by musical alchemist Simon Cowell on the X Factor in 2012 and currently composed of Ally Brooke, Dinah Jane, Lauren Jauregui, and Normani Kordei — say they’re just now coming into their own. They’re on the cusp of releasing a third album, this time as a foursome after the departure of Camila Cabello at the end of 2016. And their excitement for the next phase is palpable.

First up is their new single “Down” featuring rapper Gucci Mane, a party anthem that gives each singer a chance to stretch her voice over a spare and addictive beat. TIME sat down with the four singers to discuss their relationships with each other, the long legacy of girl groups and what’s different about their sound this time around.

TIME: What’s the story of “Down?” How did this song come together for you guys?

Dinah Jane: When we got into the studio, we couldn’t help but jump on the track. We found our formula that’s worked for us in our past music, so we were like, “You know what, let’s just run with this, this is what has worked — like in ‘Work from Home.'” We just found this to use as an intro into our album and to what’s to come. We’re featuring Gucci Mane, which is really special for us because we’re such huge fans. It’s special that someone like him is not only on the song, but also is being very intimate on the song. From a rapper, you never really get that — you never hear him sing that he’s down for his woman, that he loves her, that he’ll go out of his way to prove that ‘I’m down for you.’ So this record is super special to us.

You’ve all been very busy this year — Normani, you’ve been extra busy with Dancing with the Stars. How do you keep your energy up?

Ally Brooke: Normani would fly from America [to Asia], do the show, and fly back. She wouldn’t go to sleep for 48 hours and would still perform her best. It’s insane.

Dinah Jane: When we first met her, she wanted to be on Dancing with the Stars. She waited for the opportunity to come.

Normani Kordei: One thing that helped me get through was just being present, and recognizing that this was something I’ve always wanted to do. And also to look into the crowd and see my grandmother’s face. She’s like 77 now, and it’s also been a dream for her to visit Dancing with the Stars, too. It was a blessing. Even though I was really, really exhausted. I was on melatonin like every single flight.

You guys are entering a new phase: this is your third album, and now you’re a foursome. How have you changed as a group — musically, individually — since you started out?

Ally Brooke: The very exciting thing about going into this album is that we know the story we want to tell. We draw from our personal experiences. We’ve been in the studio, and we’ve had a lot of creative control. And through that, we’ve been able to co-write more than half of our album. It was an amazing process to have that creative freedom. It’s great to put in our voices and our words on this album.

You each come from different backgrounds and bring something different to the table. How would you describe what sets each of you apart?

Lauren Jauregui: Can we do each other? I’ll start. I’ll take Dinah. Dinah is the youngest; she has the lightest energy. She’s super hard-working, but on top of that she’s so fun and energetic. When we’re in a down place, she wants to hype it up, she’ll put some music on. She’s also a really good friend. In the studio particularly, her melodies are sick and she comes up with cool backgrounds. To watch her work and get excited about a concept is dope.

Ally Brooke: I’ll do Normani. When it comes to creative, she brings the rhythm and she brings the tone. You’ll hear a rough demo, and then you’ll hear Normani and she’ll have added some emphasis to the record. It can range from soft and sweet to ‘I’m gonna dominate this real quick.’ And she is so breathtaking on the dance floor; you paint on the dance floor, and are so obviously hard-working. If you fall onstage, you’re gonna make it really cute — that happened today [on Good Morning America]. She’s very — what’s that word? Where you bounce back? Resilient.

Normani Kordei: Lauren is definitely my inspiration. Not just musically, but as a human being. It’s cool to see the love and compassion she has for the world, and the fact she is courageous enough to go beyond herself and not really care what other people have to say because she knows that she’s speaking for those people that are fearful to raise their voices about what they’re going through. I genuinely learn a lot from her. [Because of her,] I’m able to walk more confidently in conversations we have, on issues, on politics. She’s really freakin’ smart, man!

Normani Kordei: She really is. [To Jaregui] I want to be just like you.

Dinah Jane: I really love my Allison. I’m the youngest, so I look up to Ally; she’s that sister that you always want to be around. She’s very inviting. She wants you to feel good about yourself, and know you’re always loved and cared for. She has this family-like attitude. If you’re down, she’ll run across the states to pick you up. I love how much you admire your family and your faith. You have that spirit that’s so bright.

Lauren Jauregui: So we hate each other. [All laugh.]

Looking at the history of girl groups and boy bands and the pressures they’ve faced in staying together, what lessons have you learned from those that have come before you?

Ally Brooke: Like the Spice Girls, Destiny’s Child, all the other groups — they let their individuality shine. They stayed true to themselves. To see that, and to see a range, like in the Spice Girls, they were each not holding back. That’s inspiring for us as a group.

Dinah Jane: They had Baby, they had Sporty. We tried to touch base on our individuality in this group. Musically, Destiny’s Child is what we steer towards. We all have very soulful, rich tones. It’s been amazing to be in the studio lately and direct the producers and the writers and tell them to paint what we’re saying. It’s been fun to vibe off each other. Musically, it’s become much richer for us.

Lauren Jauregui: Also, we got advice from Kelly Rowland.

Lauren Jauregui: She’s so real and so genuine when she speaks to us. She saw us and was like, “I’m so proud of y’all for sticking together and being strong together.” She told us, “Let everything out in your music. Just go in there and write your faces off. Let the music speak for itself.” That was right before we started our album writing process. Her passion for what she was telling us — she was so serious in saying that she believed in us.

Lauren Jauregui: She was part of one of the most successful girl groups of all time who we grew up listening to, and she wrote a lot of music. Knowing that, and hearing that from her mouth, was like, “We can do this.” We have so much to draw from. We’re all so creative. I know we can do this. She validated that. 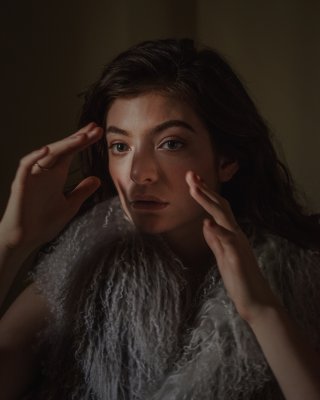 Lorde: Life of the Party
Next Up: Editor's Pick