London Mayor Sadiq Khan is no stranger to Twitter put-downs.

During the mayoral election of 2016, his opponent, Zac Goldsmith, was accused of running a campaign that bordered on Islamophobia. Frustrated, Khan took to social media to write the most memorable line of the race: “Hey @ZacGoldsmith. There’s no need to keep pointing at me & shouting ‘he’s a Muslim’. I put it on my own leaflets.”

These days this son of Pakistani immigrants, who is increasingly viewed as a future leader of the Labour Party, chooses to be statesmanlike in the face of personal attacks — and rise above the storms created by those who seemingly govern by social media.

This was why the mayor declined to respond to President Donald Trump’s extraordinary criticisms of Khan on Twitter, following the attack in central London that killed seven people on Saturday night.

Khan told Londoners there was “no reason to be alarmed” because of the increased numbers of police on the streets on Sunday. Trump took the quote wildly out of context to heavily imply Khan is complacent over the terror threat.

This poured more fuel on a fiery feud that started 13 months ago when TIME interviewed the first Muslim mayor of a major global city. In his first interview with international media, Khan seethed at Trump’s Muslim travel ban, stating he was “confident” Trump wouldn’t win the presidency.

Since the exchange on Sunday, the dispute between Trump and Khan has escalated. The U.S. President called him out in a second tweet, and Khan has called for Trump’s much-vaunted state visit, originally planned for the spring and now due in October, to be cancelled.

But Britain’s top lawmakers have been cautiously responding to the spat, only days before a general election on Thursday. Jeremy Corbyn, the leader of Khan’s own Labour Party, criticized the President for lacking “grace and sense.” Liberal Democrat leader Tim Farron, whose party has almost zero chance of winning power this week, backed Khan’s call for the state visit to be cancelled.

Yet Theresa May, the U.K.’s Conservative Prime Minister, has only mildly rebuked the President. Pressed by the media over Trump’s tweets, May said Khan was a “good” mayor and “to say anything else would be wrong.” Two days after the tweet, she conceded Trump had been “wrong” to criticize the Mayor.

Some lawmakers in May’s own party believe this is good politics. “Theresa May was very diplomatic about this,” says Alex Deane, a former chief of staff to David Cameron who led one of the main Brexit campaign groups during last year’s E.U. referendum. “She’s staying on the right side of this president, who has a long memory and still resents insults that were thrown at him before the presidential election.”

It would surely have benefitted May to slap down a U.S. president who is broadly reviled in the U.K. in the middle of an election campaign, but Conservatives say she took the longer view. “She did very strongly back the mayor, but I don’t think she should be diverted because Trump has found his thumbs on the Twitter button,” a government source tells TIME. “I wouldn’t expect her to suddenly become a troll of Donald Trump.”

Other leading Conservative lawmakers praised May to TIME for seeing “the bigger context” and avoiding getting involved in a “counterproductive” spat over Trump’s “erratic and silly” use of social media. Instead, they praise her for making sure the so-called ‘special relationship’ remains after some rocky patches over the past month. May has been angling to secure a lucrative trade deal with the U.S. when Britain leaves the European Union in 2019.

But John Spellar, a former Labour minister, argues that protecting the special relationship does not excuse the lack of condemnation of Trump’s comments – even though Spellar is honorary treasurer of a Parliamentary group dedicated to fostering U.S.-U.K. links. “As someone who is a lifelong supporter of our alliance with the U.S., and who believes that alliance is more important now than ever, I will still say that Donald Trump’s behavior demeans his office,” he says. “Trump should recognise that he has made a mistake and apologize.”

He added: “As far as May is concerned, it’s pathetic. I don’t think people on Trump’s side of the Atlantic will be any more impressed [by May’s response] as they have been impressed on ours.”

This might sound like a classic case of realpolitik versus principle. However, one prominent figure in the Labour Party who was caught up in Saturday’s attack believes it is both, because Trump’s comments could stir other extremists.

Richard Angell, who is director of a Labour Party think tank called Progress, had taken a single bite of his duck and date shish meal when dining in the Arabica Bar & Kitchen in Borough Market when the terrorists struck on Saturday. He was unharmed and his defiance has turned him into a viral star, after he vowed to return to the restaurant to finish his dinner and pay the bill with a double-tip for staff.

“May didn’t have a response to Trump’s comments,” seethes Angell. “The Prime Minister at a time like this should be for all Britons. She should not stay silent when somebody tries to give an undeserved victory to terrorists who thought they could bring down London with a rental van and three knives … And that is what Trump is doing, he’s trying to give them a victory. As someone who was involved in that incident, I cannot, shall not, will not [let them win].”

And despite May’s insistence the state visit would be still on, a junior government source said the politics of Trump’s Twitter intervention might see it pushed back yet further. “He’s certainly shortened his odds of getting a state visit any time soon,” the source says. 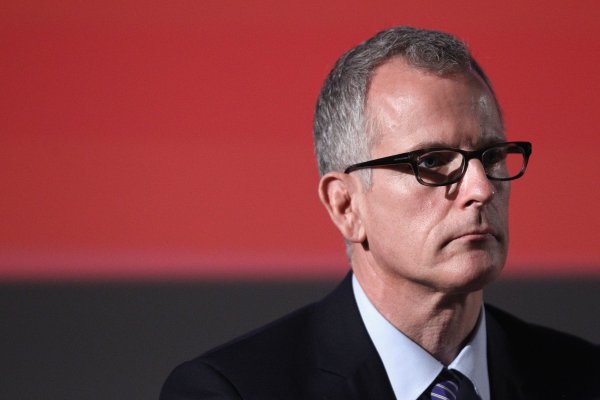 Former British Police Chief: It's Time for the U.K. to Legalize Pot
Next Up: Editor's Pick