A poster in solidarity is seen on a hoarding outside London Bridge railway station in London on June 5, 2017 at the cordon near the police scene of the June 3 terror attack on London Bridge and the nearby Borough Market.
Niklas Halle'n—AFP/Getty Images
By Tara John

A man who witnessed the London terror attack on Saturday, which killed seven people and injured dozens, returned to the restaurant the following day to pay his bill and tip the staff.

Richard Angell told Buzzfeed News that he was in the Borough Market restaurant, Arabica Bar and Kitchen, when he witnessed people covered in blood running by and heard gunfire.

“If they [terrorists] have a problem with me having a G&T with friends and flirting and being gay then I’m going to carry on doing it” he told Buzzfeed. “If that’s so barbaric to these people then two fingers up to them.” 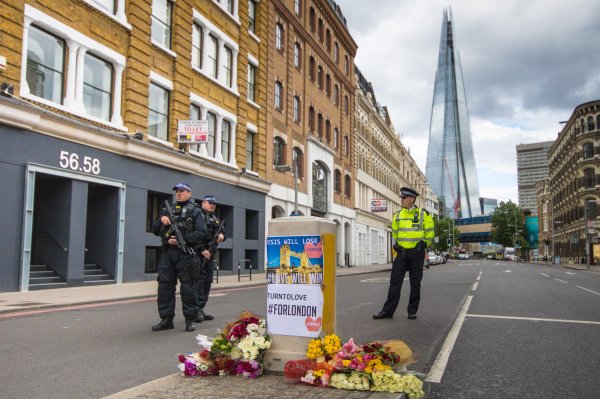 These Are the Victims of the London Bridge Attack
Next Up: Editor's Pick