'Enough Is Enough.' Theresa May Makes Call to Action After London Bridge Attack

Britain’s Prime Minister Theresa May has said that the country is experiencing a “new trend” in the terrorism threat after experiencing three fatal attacks in the space of just three months, hinting at a broad crackdown on extremism in the country.

Speaking on Downing Street Sunday morning, May called for a shakeup in counter-extremism and counter-terrorism efforts, suggesting that there would be a review of the current powers and laws in place. “We cannot and must not pretend that things can continue as they are,” she said, later adding: “Enough is enough.”

On Saturday evening, three assailants struck pedestrians on London Bridge with a van before going on a stabbing spree in nearby Borough Market, armed with knives and long blades. At least 7 people died, and 48 were hospitalized after the attack. The suspects were shot dead by police eight minutes after the initial emergency call.

The attack came less than two weeks after a suicide bomber in Manchester killed 22 people at an Ariana Grande concert, and less than three months after another vehicular attack on Westminster Bridge in London that killed 5 people.

After praising the courage of the police, paramedics and general public “who defended themselves and others from attackers,” May revealed that the U.K.’s security, intelligence agencies and police have disrupted five credible terrorism plots since the Westminster attack in March. “The recent attacks are not connected. but we believe we are experiencing a new trend in the threat we face, as terrorism breeds terrorism,” she said.

May called for more vigilance “across the public sector and across society” in relating to “identifying” and stamping out terrorism. “That will require some difficult, and often embarrassing, conversations,” she said. “But the whole of our country needs to come together to take on this extremism, and we need to live our lives not in a series of separated, segregated communities, but as one truly United Kingdom.”

As well as calling on the public to be “most robust” in tackling terrorism, May said there needed to be an international agreement to “regulate cyberspace,” to prevent terrorists from having the “safe space” they need for their extremist ideology to breed. “That is precisely what the internet, and the big companies that provide internet-based services provide,” she added.

May said that the U.K.’s general election will go ahead as planned on June 8, although the major political parties have temporarily suspended their campaigning. “This can never be allowed to disrupt the democratic process,” she said.

“As a country, we must come together, we must pull together, and united we will take on and defeat our enemies,” May concluded, before heading back inside Downing Street. 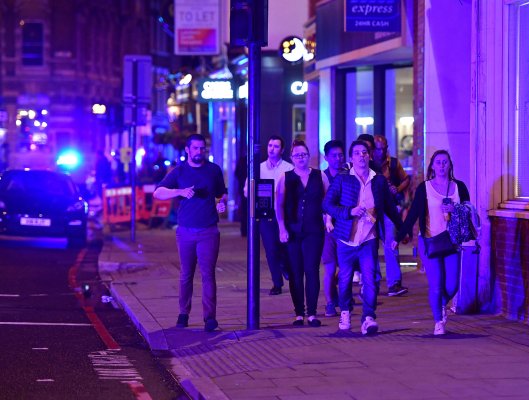 People in London's Borough Market Fought Back as Terrorists Struck
Next Up: Editor's Pick